Long-standing mitral valve disease is associated with enlargement of the left atrium as a compensatory mechanism. Giant left atrium is seen in only 19% of patients and such a low incidence is probably related to an early development of pulmonary hypertension.

We report the case of a giant left atrium with big thrombus diagnosed during an echocardiography done systematically as part of an etiologic assessment of a stroke.

Echocardiography is the procedure of choice for the diagnosis of cardiac mass involving the left atrium. It has been shown to be a superior method in defining the characteristics of a mass in the left atrium:  as it helps to characterize the mass by morphologic shape and appearance, site of attachment, types of margins, and presence or absence in the left atrial appendage.

This is a 70-year-old woman without cardiovascular risk factors, having led four pregnancies without incidents, who has presented one month ago a regressive cerebral vascular accident. She was put by her neurologist under aspirin then addressed to the cardiology department for etiological assessment of her stroke. The patient complained no dyspnea or palpitation. Physical examination did not reveal signs of heart failure. At heart auscultation she had an apical diastolic rumble. Electrocardiography showed only an atrial fibrillation. A hugely enlarged left atrium (80 cm2 / 140 ml/m2) occupied by a big thrombus (70 × 60mm) was demonstrated by transthoracic echocardiography (Fig. 1). 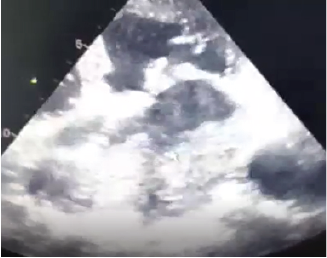 The two mitral commissures were fused and the sub-mitral valve was retracted. 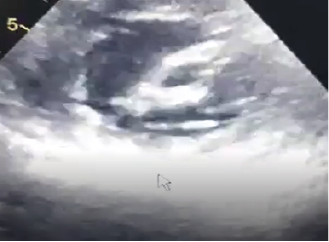 Tricuspid valve was severely incompetent with an estimated pulmonary artery systolic pressure of 80 mmHg. The tricuspid ring was dilated to 24 mm / m2. The aortic valve was also affected by rheumatism, it was remodeled and the site of minimal aortic insufficiency (Fig. 3). 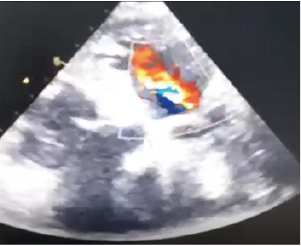 After performing coronarography which was normal the patient was addressed in emergency to heart surgery department for mitral valvular replacement with tricuspid annuloplasty associated with surgical thrombectomy.

Previous studies found that the incidence of left atrial thrombus among patients with mitral stenosis associated with AF varies from 7-38%. Such an incidence is directly related to the size of left atrium  [11]. It is interesting to note that not all patients with GLA have an associated thrombus formation [12]. Goldsmith and colleagues , found that patients with mitral valve disease have associated left atrial endocardial damage [13]. Such damage contributed to the risk of thrombus formation. The other factor is related to the activation of coagulation system within the left atrium [14]. Patients with mitral stenosis have a significantly high level of fibrinopeptide A, thrombin-antithrombin III complex and Von Willebrand factor antigen in the left atrium. These biochemical markers are responsible for the formation of thrombosis even during anticoagulation regardless of the severity of mitral stenosis or size of left atrium. Our patient had a mitral stenosis associated with chronic AF. Both factors were responsible for the development of Giant Left Atrium and thrombosis. In such situation medical treatment is based on effective anticoagulation. The aim of surgery in giant left atrium is to correct the mitral valve abnormalities, to treat compressive manifestations, to prevent thromboembolism and to revert atrial fibrillation into normal sinus rhythm especially by associating plicature of left atrium at the mitral valve replacement. Plication of the left atrium was not indicated in our patient, to avoid unnecessary complication as circumflex coronary artery injury, pulmonary vein obstruction and oesophageal stricture. Previous study by Tonguc and colleagues [15], compared patients undergoing mitral valve replacement (MVR) with or without plication, found no significant difference in hemodynamic improvement and reduction of left atrial diameter .Also, the incidence of left atrial thrombus after MVR showed no difference whether plication was performed or not [15]. If the thrombus is big and organized thrombectomy is indicated however removal of an organized thrombus from the left atrium can be challenging especially when it is huge in size.

Cardiac thrombi appear more frequently than cardiac tumours. They are typically located in the atrium, more often in the left, and generally occur in patients with organic heart disease especially mitral stenosis. Their treatment is often based on effective anticoagulation with K antivitamins. Surgical thrombectomy is rarely indicated, especially in the presence of large and organized ones.

©2021 Wael Y. This is an open-access article distributed under the terms of the Creative Commons Attribution License, which permits unrestricted use, distribution, and reproduction in any medium, provided the original author and source are credited.