Meningoencephalomyelitis of Tubercular Origin: About A Clinical Case Report

Tuberculosis of the central nervous system remains a serious infection that can be life-threatening. This encourages us to systematically evoke the diagnosis in front of any symptomatology suggestive of central nervous system involvement, particularly in our endemic context. Tuberculosis of the CNS is very polymorphous, sometimes with deceptive clinical and radiological pictures, more so when it comes to meningoencephalomyelitis, as was the case for our patient. The diagnosis of these neurological forms has long benefited from the contribution of medical imaging, including computed tomography (CT) and magnetic resonance imaging (MRI). Its bacteriological confirmation is not always easy and when it exists, it is often late. Our work reflects this great clinical polymorphism and illustrates the variety of localization of neuromeningeal tuberculosis. Despite the existence of powerful anti-tuberculosis drugs, tuberculosis remains a severe infection that can affect the functional and vital prognosis. Only early diagnosis and treatment initiated early enough guarantee a good prognosis.

Seventeen year old patient with no previous history consulted in the emergency room for febrile meningeal syndrome complicated by disturbance of consciousness with acute settling paraplegia with acute urine retention. On admission, she was found to be a drowsy, hemodynamically stable patient with arterial pressure 127/65 mmgh, heart rate 100bpm, eupneic 20 c/min and saturation 99%, febrile at 39 degrees. Neurological examination revealed a flaccid paraplegia rated at 0/5 with an umbilical sensory level, abolished ROTs, left convergent strabismus, and a bladder globe. The rest of the physical examination was unremarkable. An emergency brain CT scan did not reveal any abnormality and a lumbar puncture revealed a xanthochromic aspect, hyperproteinorachia: 2. 98 g/l hypoglycorachia: 0.05 g/l (glycemia: 1.05) With cellulorachia at 40 with lymphocyte predominance in 60%. Treatment based on C3G meningeal dose, acyclovir at a rate of 10 mg/kg/8h and anti-TB quadritherapy (protocol) was started. Emergency spinal cord MRI to eliminate spinal cord compression, in order to objectify transverse myelitis extending over the entire lumbar region and polyradiculoneuritis involving the roots of the ponytail (figure 1). 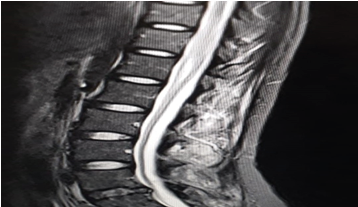 Figure 1: Medullary MRI (Transverse Myelitis Extending Over the Entire Lumbar Region and Polyradiculoneuritis Involving the Roots of the Ponytail)

A cerebral MRI was performed to show the appearance of right fronto-temporal meningoencephalitis and left fronto-temporo parietal meningoencephalitis with a left external lenticulocapsular ischemic lesion (figure 2). Herpes PCR was performed in the CSF supplemented with expert tuberculosis gene on CSF which showed the presence of mycobacteria DNA of the tuberculosis complex. Chest X-ray was normal, with BK sputum negative. The treatment was completed by corticotherapy (product and dose at d4) and withdrawal of antivirals and C3G. The evolution was favourable at two weeks of treatment with disappearance of the HTIC syndrome and the beginning of recovery of her deficit with type mobilization of the toes and sensitivity, then the patient was transferred to the infectious disease department. 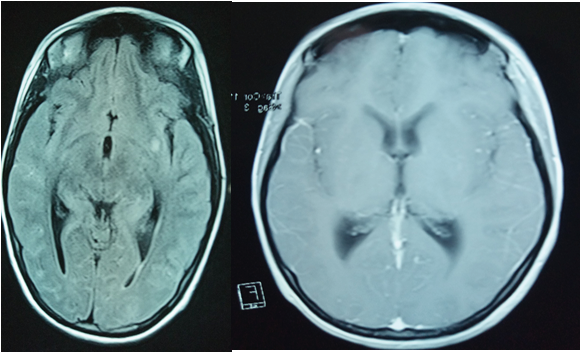 Neuromeningeal tuberculosis is a fairly rare and serious condition that can cause meningitis, or meningoencephalitis, or myelitis [1, 4].

Our case includes all three conditions, including meningoencephalomyelitis.

Tuberculous meningitis and meningoencephalomyelitis are the most frequent forms and are responsible for death or neurological sequelae in more than 50% of cases despite tuberculosis treatment [5]. Tuberculous myelitis is rare, accounting for only about two out of every 100,000 cases of tuberculosis, and can be extradural, intramedullary, or intradural extramedullary [4].

In our case it is a transverse myelitis extending over the entire lumbar region and a polyradiculoneuritis involving the roots of the horse tail (figure 1).

The localization at the level of the central nervous system is characterized by a clinical polymorphism [3, 4, 5] sometimes posing serious differential diagnostic problems. Therefore, the anamnesis and the clinical examination remains a capital time to get very quickly on the way to tuberculosis with general inaugurals such as fever (39 degrees) as well as it can be missing [4]. AEG with as a factor favoring under nutrition, night sweats and weight loss, neurological signs: Headaches, vomiting (HTIC syndrome), motor deficit (monoplegia, hemiplegia, tetraplegia), In our patient the sign was a flaccid paraplegia; Convulsion, which is also a sign of poor prognosis, daytime sleepiness and nocturnal insomnia as was also the case; obsnubilation, coma, sometimes a confusional syndrome [6].

This clinical polymorphism was even more evident in our case because it was a tubercular meningoencephalomyelitis.

Disorders of consciousness or convulsions are the main predictors of death, while focal signs predict the persistence of after-effects [7, 8].

On examination we find: a meningeal syndrome, a pyramidal syndrome, psychiatric disorders [6, 7] temporospatial disorientation, agitation and delirium, cranial nerve damage: oculomotor paralysis is more significant in the case of damage to the third pair of the sixth limb, pupillary inequality as in the case of our patient.

This same biochemical formula of CSF was found in our case, the expert gene and tuberculosis PCR on CSF were positive.

Just as it may not reveal abnormalities, especially at an early stage, this was the case in our observation, hence the importance of MRI [7, 9, 10]: which is of interest: diagnosis (it detects lesions even at an early stage and of small size, as is the case in our patient), prognosis, and follow-up in neuro-meningeal tuberculosis, particularly in tubercular myelitis and tubercular epiduritis [11, 12, 13].

Treatment: The treatment of neuromeningeal tuberculosis consists of: ANTIBACILIARIES: Quadritherapy (RHZE) for 2 months as background therapy and 7 months of Dual Therapy (RH) (15): ISONIAZIDE: 5 mg/kg/day, RIFAMPICIN: 10 mg/kg/day, PYRAZINAMIDE: 25mg/kg/day, ETAMBUTOL : 20mg/kg/day; and the Corticosteroid Therapy recommended by the WHO and the Infectious Diseases Society of America (IDSA) and the British Infection Society [14 , 16]: Methylprednisolone at a dose of 1 mg/kg/day with 6 to 8 weeks of treatment to begin tapering the doses.

The same protocol was used in our patient, supplemented by motor physiotherapy and prevention of thromboembolic disease, given the paraplegic nature of the disease.

Neuromeningeal tuberculosis is a therapeutic emergency because the prognosis will depend on the stage of the beginning of treatment according to the British medical research council criteria for severity TNM which includes three stages in order of severity [17].

The stage of meningitis is a well-identified predictor of mortality and/or sequelae.

When the treatment is started at stage I, mortality and morbidity are low, as is the case in our patient.

On the other hand, when treatment is initiated at stage II, mortality is 50% and patients who remain alive may retain neurological sequelae.

According to the CNS tuberculosis literature, progression under treatment remains severe, with 20 to 60% mortality.

In our patient the evolution was favorable under anti-bacillary treatment associated with corticoids with recovery of sensitivity and motor skills in two weeks.

Neuromeningeal tuberculosis is an extremely heterogeneous disease in its clinical and radiological presentation. It is a diagnostic and therapeutic emergency. Its prognosis, classically unfavourable, is closely related to the early diagnosis and the rapidity of therapeutic management.

In our case, it is a tubercular meningoencephalomyelitis confirmed on PCR and GENE EXPERT on CSF, having responded favourably to early anti tuberculosis treatment and corticosteroid therapy.

©2020 Charra B. This is an open-access article distributed under the terms of the Creative Commons Attribution License, which permits unrestricted use, distribution, and reproduction in any medium, provided the original author and source are credited.

Figure 1: Medullary MRI (Transverse Myelitis Extending Over the Entire Lumbar Region and Polyradiculoneuritis Involving the Roots of the Ponytail)