Transplantation of a tooth is often associated with the resorption of the root, frequently followed by ankylosis. In this case report, a female patient with an external root resorption following transplantation of her immature lower left premolar tooth into the socket of the upper right second premolar tooth, was investigated clinically and radiographically, and then successfully treated by the root canal medication with Calcium hydroxide (Ca(OH)2) paste. This case presentation suggested that in the case of transplantation of an immature tooth, endodontic treatment or pulp removal should be initiated as soon as the root apex is closed enough to allow preparation of the root canal, and Ca(OH)2 paste can arrest the progression of root resorption.

Resorption of the root is the most common cause of tooth loss following replantation [1-3] or transplantation [4, 5]. It is initiated either outside of the tooth giving rise to external resorption or from within the pulp where it is termed internal resorption [1, 2]. Several types of external root resorption such as surface resorption, inflammatory resorption and replacement resorption (ankylosis) have already been described in many of the previous studies [6-9]. Inflammatory resorption is usually occur around the apical foramina and caused by injury to the periodontium from trauma, periodontal infection, or orthodontic treatment which initiates an inflammatory response within the periodontal ligament and leads to resorption. On the other hand, in the replacement resorption, there is a direct union between bone and root substance, and bone gradually replaces the tooth substance. This condition is diagnosed radiographically by a progressive disappearance of the periodontal ligament space and the root substance, followed by bone replacement.

Root resorption following replantation or transplantation of immature tooth could be more active and occur in a short span of years; clinical studies have reported that replanted immature teeth were lost more often and had a lower survival expectation than mature teeth in both adolescents and adults patients [1,10]. In the present case, we investigated a female patient with an external root resorption following transplantation of her immature premolar tooth, then treated by the root canal medication with Ca(OH)2 paste and observed over a period of twelve months following treatment. 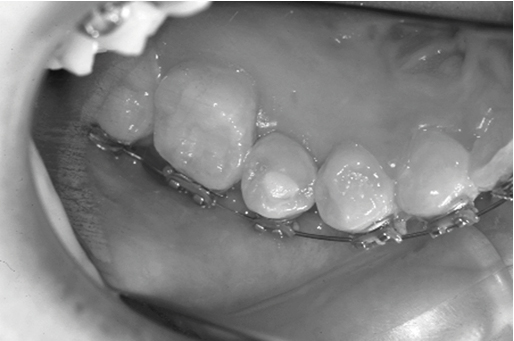 He also stated that endodontic treatment was not performed at that time, because of the incomplete root formation of the tooth (open wide apex) and he was hoping for pulpal revascularization, followed by natural closing of the root apex. Therefore, he kept the patient under careful radiographic observation. However, one year later, as a marked external root resorption was detected by radiography, the dentist referred her to our hospital. On clinical examination, small swelling was seen on the buccal side of the effected tooth and the tooth was not tender to palpation or percussion and did not respond to electric pulp tester. Upon radiographic examination, a bowl-shaped external resorption cavity was seen with reduction of the periodontal ligament space, and there was almost completion of the root formation (Figure 2). 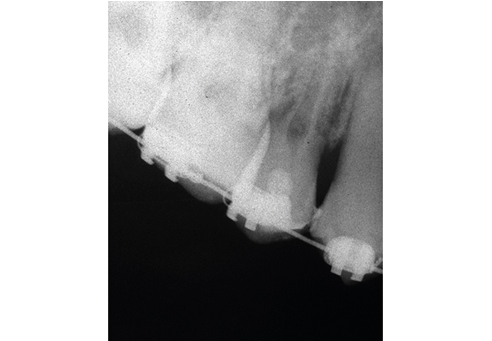 The affected tooth was soon subjected to endodontic treatment. Opening the pulp chamber resulted in a large amount of pus discharged and it was controlled with irrigation with sodium hypochlorite solution. The tooth was then treated as an infected root canal treatment. Rubber dam was not placed, because of the presence of the orthodontic wire in that side and therefore cotton gauge was used. The root canals were prepared using conventional technique with files and reamers (Kerr Co. Romulus, MI, USA)to a size # 50 master point wideness. Then root canal was irrigation with 3% sodium hypochlorite solution (Nippon Shikayakuhin Co. Ltd, Shimonoseki, Japan) and performed intracanal medication with Ca(OH)2 paste. The patient was recalled at once a week in the first two months, followed by once in a month for another ten months. At one year, a marked reduction in the root resorption was seen on radiographic examination, which indicated satisfactory healing. Root canal was obturated with gutta-percha point (GC Corporation, Tokyo, Japan) using the lateral condensation method (Figure 3). Thereafter the patient was kept under radiographic observation in every three months for another twelve months (Figure 4). 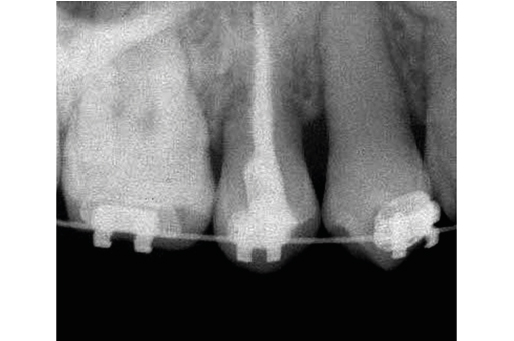 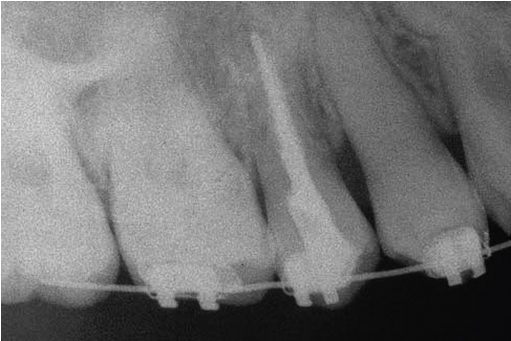 Transplantation of tooth is said as a very useful alternative method to conventional prosthetic rehabilitation or implant treatment in cases of partial edentulism [5, 12], and when appropriate conditions of the receipt site are present, it is also considered as a safe method for immature teeth [11]. Furthermore, the prognosis of transplantation has been demonstrated in several long-term clinical studies [5, 6, 11-13]. It appears from these studies that transplantation have a very good long-term prognosis, especially if performed at the proper stage of root development. A five year survival rate of 95% to 100% was found according to stage of root formation at the time of transplantation, and pulpal revascularization develops in almost all teeth after transplantation [6]. Another long term clinical results revealed 94% success rate following transplantation of immature teeth [11]. However, the risk of pulp necrosis [6] or root resorption [3-5] is very closely related to the transplantation.

Regarding the treatment, it has been reported that pulpal application of Ca(OH)2 paste has the ability to arrest external root resorption [14-15]. With the Ca(OH)2 paste, a diffusion of ions into the dentinal tubules, may cause an increase in pH, thereby influencing the resorption process at the root surface [16]. Conversely, it has been reported that calcium hydroxide therapy has no effect on replacement resorption (ankylosis) once it established [17]. In our present case, when Ca(OH)2 paste was used as an intra canal medicament during the endodontic therapy, the resorption was subsided within twelve months. Since one year has been passed after the obturation of the root canal, there is no further progression of external root resorption (Figure. 4). However, in the cases of ankylosis, ultimately there is always a risk of crown fracture of the tooth off the gingival crest as ankylosis progresses, and results in a complete replacement of the root by bone [9]. A long-term clinical evaluation is therefore necessary to determine if there is any sign for fracture in the crown. It can be suggested that following transplantation of immature tooth, endodontic treatment and pulp removal should be initiated as soon as the root apex is closed enough to allow preparation of the root canal, and Ca(OH)2 paste can arrest the progression of root resorption.

In that case, intracanal medication with Ca(OH)2 paste is effective in reducing root resorption and promoting healing.

All authors declare no conflicts of interest in this article.

©2020 Yamada Y. This is an open-access article distributed under the terms of the Creative Commons Attribution License, which permits unrestricted use, distribution, and reproduction in any medium, provided the original author and source are credited.