Over the years, the evolution of forensic investigation has been presented slowly but gradually, with the arrival of new forms of scientific analysis and the contributions of specialized knowledge areas such as Forensic Dentistry, it is clear that an expert specialist in A certain area contributes its history, methodology, protocol and knowledge to make Forensic Sciences the true tool of justice. And to be able to say at the end that "Justice is in the hands of science" [1].

The determination of the Legal Medical age becomes a real challenge when the human remains have been subjected to processes of putrefaction, combustion and other external forces. In many of these cases, the only thing that preserved the hard structures: bone and teeth, and therefore, the latter could be the only resource to determine the legal medical age, that is, the age that was at the time of death (Carrasco et al. to the.).

In the literature, the relationship between root dental translucency and increasing age has been described in individuals over 20 years of age, but, even so, no consensus has been reached in establishing a unique, reliable and precise method that delivers a satisfactory result. be it due to the existence of subjective factors, lack of specialized personnel, inadequate infrastructure, non-validated used technology, among others (Kinney et al., 2003).

Sadly we have noticed that the Identification techniques that are available in forensic sciences, referred wide ranges of up to 14 years of standard deviation and worse still these techniques were performed in France, Italy, India and the United States and arbitrarily we used in Mexican population .

Age determination tables have been created through the measurement of root dental translucency on a sample of the Chilean population, from the linear regression calculation between TDR and real age, achieving an age estimate with 70.8% of certainty with a ± 6 years, at that time very close to the real age.

The average error refers to the difference between the estimated age and the actual age. Applying the average error in the estimation of age using the modification of the formula. In the case of the sample of adult individuals from Saltillo, Coahuila studied in this investigation, with the modification of the formula, an average minimum error of 3.7 years is obtained. So it can be inferred that this technique is more accurate for the Mexican population

Forensic Odontology in Mexico has become one of the most important specialties of Forensic Sciences because of its wide scope to provide information regarding legal proceedings [4].

They are known two components; dental and other legal one.

Speaking of the Dental component covers its field of action: Analysis and Identification puncture marks Humana]

Human Identification being a primary objective of Forensic Odontology, achieving provide parameters such as; Estimation of age, sex, Racial, place of origin and even sometimes to socioeconomic level.

This process is complicated when the bodies are very destroyed or damaged by the passage of time or other circumstances of death (the effect of heat, moisture, time, etc.).

Unfortunately most skeletal methods used for estimating age, set ranges broad age and record limits minimum and maximum age, so you have the need to find techniques that are more accurate or at least reduce this age range.

It is understandable that the more wide ranges of age estimation; greater those included in that range, enabling that somehow no one is out of it, thus lowering the percentage of specificity of age estimation.

That is why the objective of this research is to contribute to the identification process Humana from the expertise of Odontology Forensic, to give greater specificity to the estimation of the age: By modifying the dental method of estimating age of Lamendin applicable in Mexican population.

For many years Forensic Dentistry has become an indispensable tool for human identification, using techniques for dental age estimation means are divided into 3 groups:

The latter age range (25 years ahead) which gives us more problematic because of the ranges has its age estimation techniques are wide; lacking specificity, although very inclusive become.

In some Latin American countries, including Mexico used as estimation technique Age through Dental; System root translucency of Lamendin et to the.

This method was developed by Lamendin (1988) [5] which is a test that was conducted French population, in which extracted teeth from a single root as incisor, premolar or canine maxilla or mandible, based only on teeth without condition caries.

After extraction or distances the following parameters were measured: 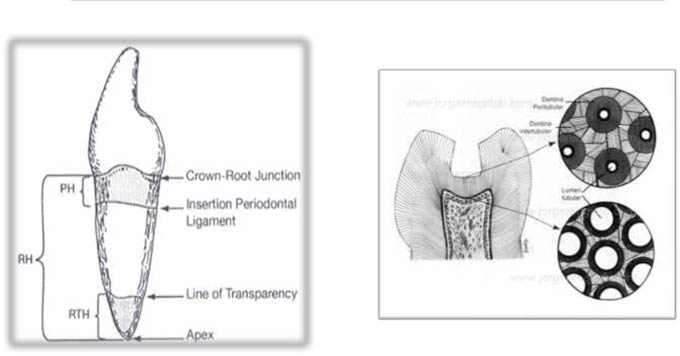 The final estimate is achieved by the application of the age ranges and standard deviation according to the following table.

Subsequent studies have verified the effectiveness and reliability of this method. Ensuring more reliable results are achieved for men between 26 and 60 years for women between 26 and 70 years, taking into account that the method Restingue adult individuals, with a minimum age of 26 years due to the metamorphosis of translucency [6].

With the standard deviation has Lamendin Technique is really specific and selective for Mexican population?

Is it valid to use the technique of Lamendin in Saltillo, Coahuila. Mexico?

Can we adjust the technique Lamendin Population of Saltillo, Coahuila. Mexico to make it more specific?

The research is comparative, transversal and prospective; It was performed in 4 stages: 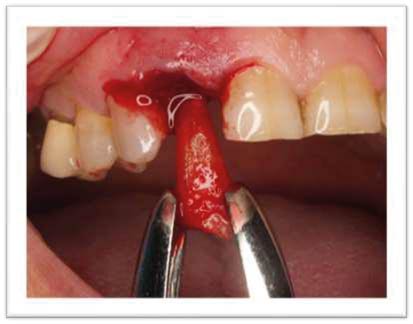 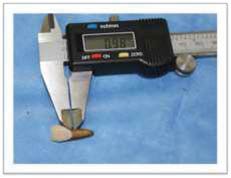 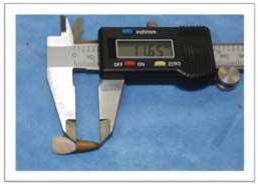 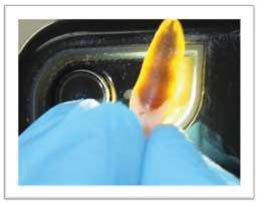 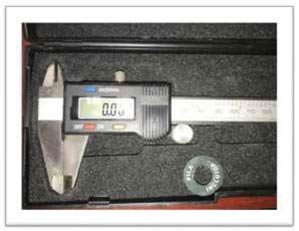 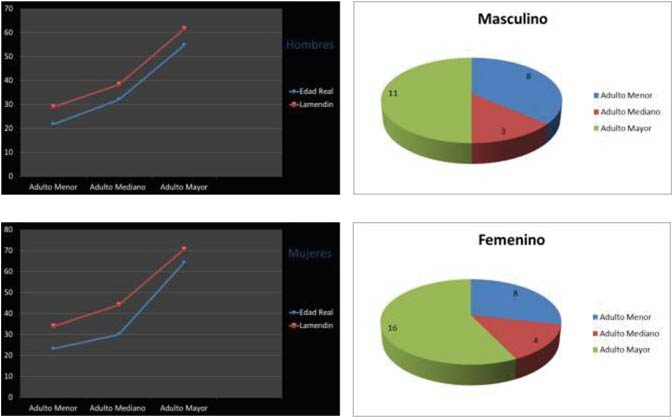 To change the specific dental formula for estimating age a multiple regression analysis was performed with the three factors used (Translucency, Regression Gingival and length Radicular) as determinants of age, following the method of stabilization whose values ​​ages calculated they were closest to the values ​​of the actual ages.

Dentin Sclerosis; Kim Trowbrige and Cohen (2002) note that dentinal sclerosis occurs by partial or complete tubule destinales of sealing can be the result of aging or produced in response to certain stimuli; as attrition of the surface of the teeth or the most common; tooth decay. Since we can not take any pathology reference must take this phenomenon as a result of aging, a feature that begins between 18 and 22 years so an average of 20.02 is taken.

From Multiple Regression analysis, the equation is modified Lamendin; modifying it as follows to estimate the most specific and exact age.

20.02 Media statistics time when it begins the physiological characteristic of Dentin Sclerosis

0.15 The range of modification Gingival Regression in mm per year (Periodontally)

0.30 The range of modification Transparency mm per year for years (Endodontic)

Statistical analysis SPSS was used. First, the average error of the ages estimated actual age by both methods was found with respect.

Subsequently, the Wilcoxon test which is a non-parametric test comparing two interrelated samples was used; that it was used to evaluate the applicability of the technique Lamendin vs Zamora technique in population of the Faculty of Odontology Unit of Saltillo Autonomous University of Coahuila in the city of Saltillo, Coahuila. Mexico. 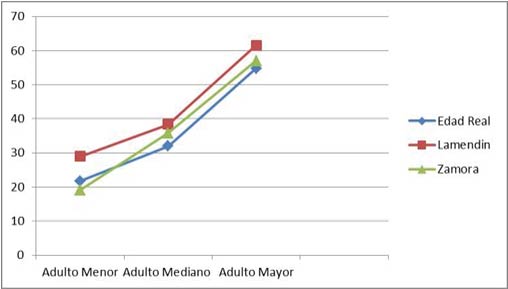 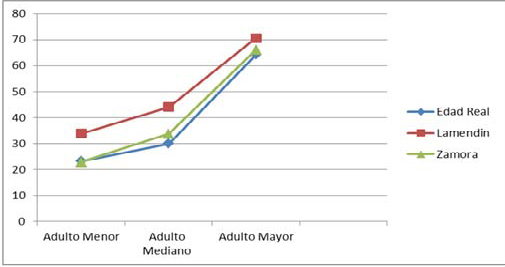 Validation of different methods to estimate age in a population tries to verify whether there is significant difference between the values ​​of estimated ages and values ​​of the actual ages.

Among the results of this research it showed that there are significant differences between the values ​​of ages estimated with the method Lamendin and values ​​of the actual ages.

The adjustment method Zamora using test multiple regression to estimate the age of the sample of adults of Saltillo, Mexico, was obtained from the correlation analysis that the higher correlation of age with the root transparency (r = 0.735 ). 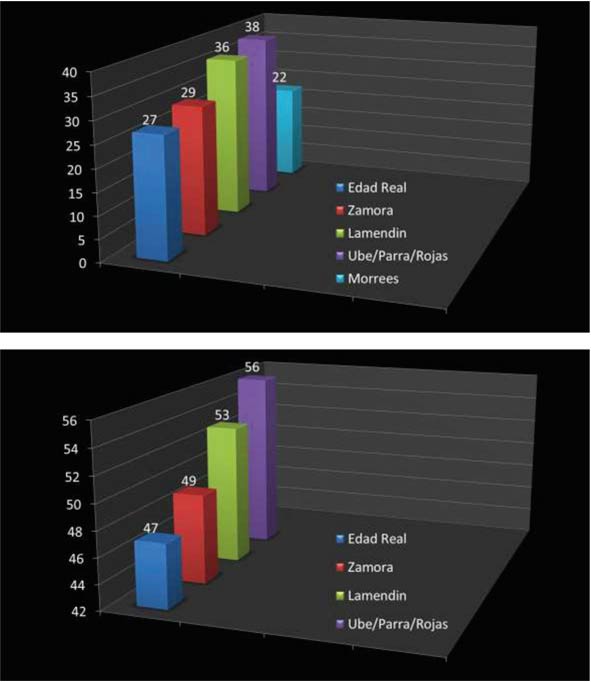 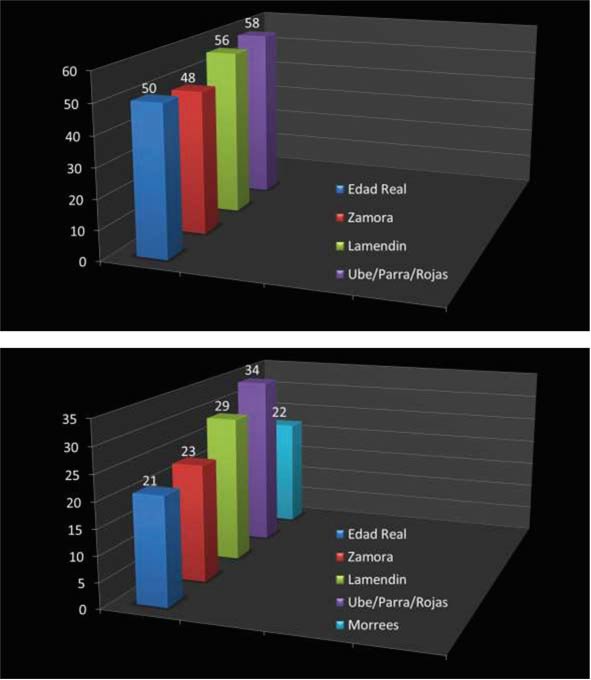 ©2020 Cesáreo ZAA. This is an open-access article distributed under the terms of the Creative Commons Attribution License, which permits unrestricted use, distribution, and reproduction in any medium, provided the original author and source are credited.