Case: A 16-year-old female presented with chief complaints of dyspnoea and foreign body sensation in the throat. Upon examination, a protruding solid, pink, spherical 4cm x 3cm mass located at the base of the tongue. Ultrasonography (US) revealed a mass 5x4 cm in size.

Methods: Resection carried out from the anterior border of the lingual thyroid along the capsule of ectopic thyroid tissue using 12mm 30 degree face-up endoscope, 5mm spatula cautery robot and a 5mm Maryland forceps.

Ectopic thyroid is a rare developmental anomaly and defined as the presence of thyroid tissue in unusual locations other than usual pre-tracheal location. It is the most frequent form of thyroid dysgenesis, accounting for 48-61% of the cases [1]. It is more commonly seen at the base of tongue hence called lingual thyroid, other sites being sublingual, higher or lower cervical and mediastinum [2, 3]. It results from aberrant embryogenesis during the descent of the thyroid gland through the neck. In most of the cases, it is asymptomatic but can cause a range of symptoms like dysphagia, dysphonia, dyspnea, feeling of fullness or foreign body sensation in throat, hypothyroidism and even hemorrhage and pain [4]. The prevalence of lingual thyroid varies between 1 in 100,000 to 300,000 persons whereas in patients with thyroid disease it is 1 in 4,000 to 8,000 and more commonly seen in females (65-80%) [5]. Surgical access to tongue base resection is challenging for otolaryngologist; thus few non-surgical or conservative modalities are being tried for lingual thyroid like thyroxine suppression and radioiodine ablation (RAI) treatment [6]. But these modalities are not optimal for every case.

Surgical removal of ectopic lingual thyroid is indicated in symptomatic patients or cases of suspected malignancies. An external approach is most often used but is associated with morbidity and a visible scar on the cervical region.

In this case, we utilized Transoral Robotic surgery [TORS] to excise ectopic lingual thyroid tissue using the da Vinci Si system (Intuitive Surgical Inc, Sunnyvale, CA). It has added advantages of using 3- dimensional endoscope, endo-wristed instruments with qualities like motion scaling and tremor filtration that help surgeons to perform surgery with high precision [7]. In this paper we are reporting our experience, safety and feasibility of resecting lingual thyroid using TORS, which was successfully executed.

A 16-year-old female from Nepal presented to our outpatient clinic with chief complaints of dyspnoea especially at night and foreign body sensation in the throat. The patient also had complaints of dysphagia. She had no history of thyroid disease.

Upon examination, a protruding solid, pink, spherical 4cm x 3cm mass, covered with intact mucosa was seen, located at the base of the tongue posterior to the circumvallate papillae. Examination of the neck revealed no palpable thyroid gland in the normal pre-tracheal position and no cervical adenopathy. Thyroid hormone tests showed normal thyroid-stimulating hormone (TSH) concentrations and normal FT3 and FT4 concentrations. The patient was clinically euthyroid. Ultrasonography (US) revealed a mass 5x4 cm in size with distinct margins restricted to the base of the tongue and absence of the thyroid gland. A thyroid scan with technetium Tc-99m sodium was performed showing marked isotope uptake in the area of the tongue and no uptake in the neck. A diagnostic biopsy was avoided due to the risk of bleeding and hemorrhage, which could be difficult to control.

1. Patient position is like Rose's position of tonsillectomy. Nasotracheal intubation was done as it allows an unobstructed view of oropharynx. Neck was extended by sandbag under the shoulders and the head is supported on a ring.

2. Painting & draping done. A 1-0 silk stitch was placed in the midline of oral part of the tongue to retract it anteriorly and Crockard retractor was used for exposing the surgical field.

3. Docking of the robot done. The base of tongue mass was visualized using 12mm 30 degree face-up endoscope. A 5mm spatula cautery was equipped in the right arm of the robot and a 5mm Maryland forceps on the left. (Figure 1) 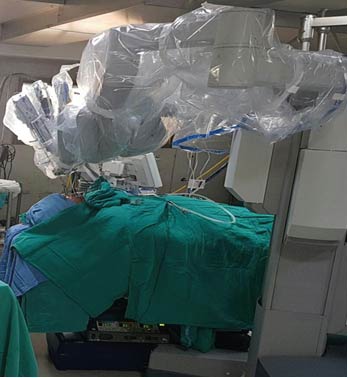 Figure 1. Docking of the Robot for Transoral Surgery

5. Resection carried out from the anterior border of the lingual thyroid along the capsule of ectopic thyroid tissue (Figure 2). Mass excised in toto and sent for histopathological examination. The lingual artery was not confronted during the dissection and complete hemostasis was achieved. 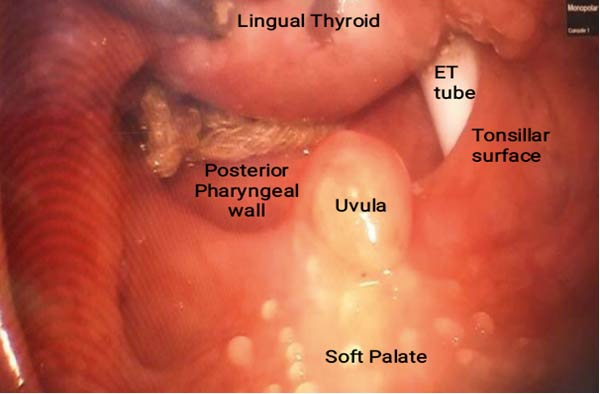 6. Undocking of robot done. General anesthesia was withdrawn and the patient extubated. The total surgical (console) time taken was 72 minutes. The patient tolerated the TORS very well with no intraoperative complications.

The patient was kept in hospital overnight for observation. No significant postoperative complications were noted. Patient was kept nil per oral for six hours and subsequently oral feeding was started with cold liquids and soft diet. Postoperatively substitutive thyroid hormone replacement therapy was given because the excised mass was the sole producer of thyroid hormone.

Gross description of the resected mass: Multiple mucosa-covered tissue pieces altogether measure 5x3x0.5 cm. No ulcer or mass lesion is identified on the surface. The cut surface shows a brownish, colloid like appearance.

Microscopic description of the resected mass: Sections show stratified squamous epithelial lining. The subepithelial stroma shows islands of normal thyroid follicles and a few seromucinous salivary glands, with mild lymphoid cell infiltrate. There was no evidence of malignancy. (Figure 3 and 4) 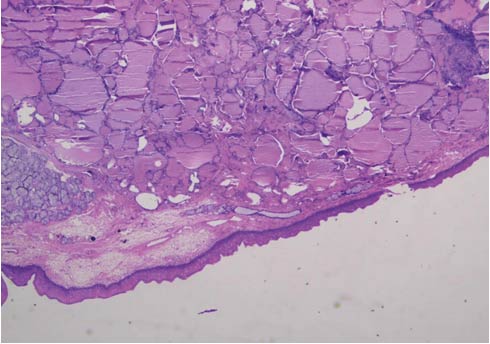 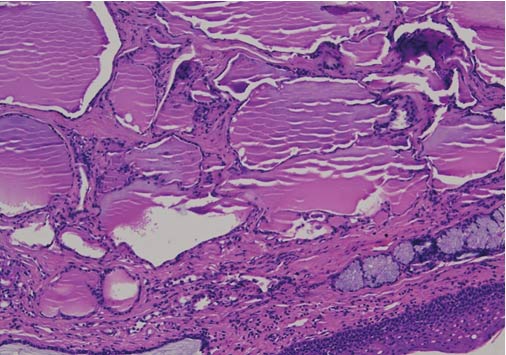 TORS of ectopic lingual thyroid tissue was successfully performed with excellent functional outcomes with decreased operating time than conventional tongue base surgeries. Less than 5 ml blood was lost during the surgery and patient was discharged within 24 hours of surgery in stable condition.

Lingual thyroid is reported to be a rare congenital anomaly and very few of them are symptomatic and do not require medical attention. Previously asymptomatic lingual thyroid can produce symptoms during the time of hormonal change like in puberty, menopause and metabolic stress [8].

Symptomatic lingual thyroid mostly demands surgical excision. Numerous approaches and modalities are available but the treatment is not yet standardized. The ultrasonography, computed tomography and magnetic resonance imaging are usually performed in determining the extent, size, depth and surgical planning. Asymptomatic cases must be kept under follow up and monitoring as asymptomatic lesion can enlarge in size with time producing symptoms and complications. Subclinical hypothyroidism can be treated with hormonal therapy. Exogenous hormones can be given, which suppresses the action of gland thereby reducing the size of ectopic thyroid. But success is not so good.

No best treatment modality of symptomatic lingual thyroid has been explained in the literature. Treatment depends on the size, extent and the symptoms of the lingual thyroid. In symptomatic cases, the main objective is to relieve the obstructive symptoms.

In cases where surgery is contraindicated like anatomical difficulties or in patient who refused surgery, radioactive iodine ablation can be considered. The efficacy and safety of the radioactive iodine ablation (RAI) has been described by the Danner et al. [9]. But it also has a disadvantage of developing acute thyroiditis, sialadenitis and radiation-induced tumors as it requires higher doses for ablating the tissue [10]. And secondly, it is contraindicated in children and woman of childbearing age [11, 12].

When it comes to surgical treatment, the clear cut indications are dysphonia, dysphagia or dyspnea. Many surgeons recommend excision of complete thyroid tissue due to the possibility of malignant transformation of the tissue [13]. Various surgical approaches have been described in the literature for lingual thyroid resection. Open approaches include trans-hyoid, supra-hyoid or cervical pharyngotomy, lip-splinting trans-mandibular and trans lingual approach [4, 14, 15, 16]. However these open surgical approaches has high morbidity rates. Since they require lip, tongue, and mandibular splitting or lateral, suprahyoid pharyngotomy and a visible neck or face scar is unpreventable. To avoid these morbidities, transoral resection techniques gain access through the oral cavity, eliminating post-operative visible scar.

Transoral approach is much preferred, excluding disadvantage of cervical open approaches leaving bad scars, long recovery time and hospitalization, swallowing dysfunction and risk of developing pharyngo-cutaneous fistula [6]. But the transoral approach is also a challenging approach, as it is difficult to obtain an optimum view of the base of tongue and the whole extent of the lesion and secondly controlling intraoperative bleeding is also a difficult task. They include use of CO2 laser, electrocautery, coblation and harmonic technologies [17]. Terries et al. and Leitzbach et al. in their separate studies reported decreased morbidity, shorter duration of hospitalization and fewer complications in transoral minimal invasive surgeries as compared to open approaches [18, 19]. However, transoral resection techniques have a limited field of view and lead to difficulty in resection owing to the difficulty in manipulation, which restricts their use [6]. Studies have demonstrated that as the size of the mass increases, transoral resectability of the mass decreases. The basic principles of avoiding complications in transoral tongue root resections are careful dissection in accordance with imaging methods and adequate anatomic evaluation in order to prevent lingual artery injury [20].

The emergence of transoral robotic surgery decreases the technical difficulties encountered in other transoral approaches. It allows a minimally invasive approach, providing splendid magnified three-dimensional visualization, minimal blood loss, resection of tissue with high precision and excellent dexterity and range of motion. [21]. The 7 degrees of freedom of da Vinci robotic arms allow it to access difficult to reach regions, providing an excellent wide-angle view of the surgical field and thus lesion could be resected in multiple planes.

It has been stated in various studies that transoral resection of a large base of tongue lesions, more than 3cm is difficult to achieve and usually not recommended [17]. But TORS enabled us resecting a large lingual tonsil of size 4cm X 5cm with minimal difficulty. The prerequisite for TORS is the adequate mouth opening, hence patients with inadequate mouth opening like in trismus or due to patient body habitus are excluded from robotic resection.

When the total excision of the lesion is indicated, the transoral approach is preferred and TORS for resecting lingual thyroid is the approach which can result in excellent outcomes, minimal morbidity, quick recovery, shorter surgery duration and hospital stay.

Robotic-assisted resection of ectopic lingual thyroid is a minimally invasive, feasible and safe surgical modality for its treatment. Postoperative morbidity is minimal and cut short the operative time and hospitalization. The cosmetic outcome of TORS, unlike open approaches, makes it a superior and viable option.

We would like to thank department of ENT and Head and Neck surgery and department of Pathology, Indraprastha Apollo Hospitals, New Delhi, India.

©2020 Nagpal K. This is an open-access article distributed under the terms of the Creative Commons Attribution License, which permits unrestricted use, distribution, and reproduction in any medium, provided the original author and source are credited.

Figure 1. Docking of the Robot for Transoral Surgery