Department of Radiology, Sindh Institute of Urology and Transplantation, Karachi

Department of Radiology, Sindh Institute of Urology and Transplantation, Karachi

Origin of celiac and superior mesenteric arteries from aorta through a common celiacomesenteric trunk is an infrequently revealed anatomic variation of all abdominal vascular anomalies.

Considerable anatomical variations of ventral splanchnic arteries have been very rarely seen during embryological development. Celiacomesenteric trunk is usually asymptomatic and may be discovered during vascular interventions. . It is of great significance to know the uncommon anatomic variations of celiac and superior mesenteric arteries for surgical interventions and angiographic procedures. Symptoms are rare and vary between unspecific abdominal pain and real abdominal angina.

23-year-old male came to our radiology department for renal donor CT angiography. CT angiography showed single bilateral renal arteries and veins. No area of narrowing, occlusion, aneurysm or arteriovenous malformation was identified. However, it was incidentally found that celiac and superior mesenteric arteries were arising from a single common trunk and supplying their normal territory. Figure 1 shows Common Celiacomesenteric Trunk in reformatted and 3D colored projections 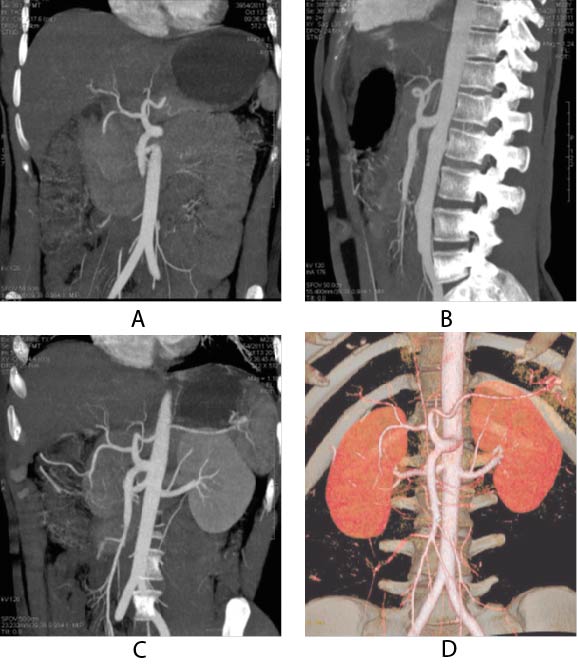 Amongst all the abdominal vascular anomalies, less than 1% of the cases account for the common origin of celiac and superior mesenteric artery from the aorta and it is believed that its incidence is less than 2.5%. 1-3

Crucial clinical connections are linked to this celiacomesenteric trunk origin. It is because a patient having this type of variation is now lacking the dual blood supply that is commonly present for the protection of abdominal viscera in the general population. The abdominal viscera are particularly at-risk during arthrosclerosis and complications of vascular interventional procedure. 7

Furthermore, aforementioned familiarization about the celiac trunk and superior mesenteric artery branches is necessary for attainment of successful surgeries, oncological and interventional procedures like lymphadenectomy around the hepatospleenomesenteric trunk, reimplantation of aorta and chemoembolization of liver malignancies, all of which can be at risk due to large visceral area supplied by single vessel.8

The best way to evaluate anatomy of arterial supply is through CTA. The anatomical variation detected by CTA has a diagnostic accuracy 97-98%.9 A 3D model of the arterial anatomy is made by the isotropic volume rendering and multi-planar reconstruction by the volumetric acquisition of data. Another benefit of the 3D image is the elaboration of the relationship between the arteries and the adjacent organs .9-11

These vessels supply to majority of abdominal viscera and to avoid serious vascular complications, it is essential to have knowledge about anomalous branching pattern of celiac trunk and superior mesenteric artery before any surgical, oncologic or interventional procedures including lymphadenectomy around a hepatospleenomesenteric trunk, aortic replacement with reimplantation of the trunk or chemoembolization of liver malignancies.

It is essential to acquire maximum information about variations in origin and branching patterns of celiac trunk and superior mesenteric artery before every surgical or interventional procedure in order to avoid complications and for patient’s safety. Many unintentional disasters can be avoided if their anatomic variations are known before hand to pursue proper management.

©2020 Jesrani A. This is an open-access article distributed under the terms of the Creative Commons Attribution License, which permits unrestricted use, distribution, and reproduction in any medium, provided the original author and source are credited.