Craniocerebral bullet wound in Dakar. About a case and literature review

Gunshot wounds are a type of craniocerebral trauma that has become increasingly common in recent years in neurosurgical practice. This is especially true in developing countries due to armed conflicts and public unrest. Their prognosis is bad and they are associated with a high death rate. In this article, we report the case of a craniocerebral bullet wound that occurred during public demonstrations in Dakar, Senegal, and was treated at the Fann University Hospital. We highlight the problem of managing this type of injury in our less developed environment.

Neurosurgeons are increasingly confronted to the management of gunshot wounds in their civilian and urban practice. The prevalence is increasing especially in developing countries due for instance to armed conflicts and turmoil. These cranio-encephalic traumas with laceration of envelopes protecting the brain have a poor prognosis [1]. Gunshot wounds are the deadliest of all gun injuries [2]. Thus 90% die before reaching a health structure, the majority of the injured die at the site of the trauma. Among those who reach health facilities 50% die in emergency rooms [1]. The monitoring of the intracranial pressure and treatment of this one when it course allows a significant clinical improvement of these patients [3]. The factors associated with mortality are age, hemodynamic and respiratory state on admission, the type of projectile, the diameter of the pupils and the reactivity as well as the lesions found on the cerebral CT scan [4]. The intervention should be performed as soon as possible if the indication is there. It must be done in the operating room [5]. The case reported below is a craniocerebral gunshot wound that occurred during public demonstrations in Dakar. We will then discuss the management of these lesions and difficulties faced in a developing country with limited resources.

Presentation of the case

It is a 32-year-old, male patient, with no particular history, received in the emergency room of the Fann University Hospital in Dakar for disturbed consciousness resulting from a cranio-encephalic traumatism by gunshot. The trauma occurred during a public demonstration. He was reportedly shot in the head with immediate loss of consciousness. We received the patient few minutes after the traumatism. On admission the patient was hemodynamically and respiratory stable. He presented an alteration of consciousness with a Glasgow Coma Scale score of 8/15 (E1 V2 M5), an anisocoria with mydriasis on the right non-reactive, left hemiplegia with Motorola strength at 2/5. Also there was a wound on the forehead lateralised on the right side, of about 2 cm in diameter with brain matter exit (Figure 1). A cerebral CT scan was performed urgently and showed an acute right hemispherical subdural hematoma, pneumencephalic bubbles and right frontal contusions with mass effect on the ipsilateral ventricle, responsible for cingular herniation (Figure 2a). In addition, a right frontal bone defect and the presence of multiple intracranial metal scraps (Figure 2b). The patient could not immediately benefit from surgery he was then admitted to intensive care unit. Two hours after his admission his state of consciousness deteriorated, the Glasgow score falling to 5 (E1 V1 M3), the pupils were in non-reactive bilateral mydriasis. He died in intensive care. 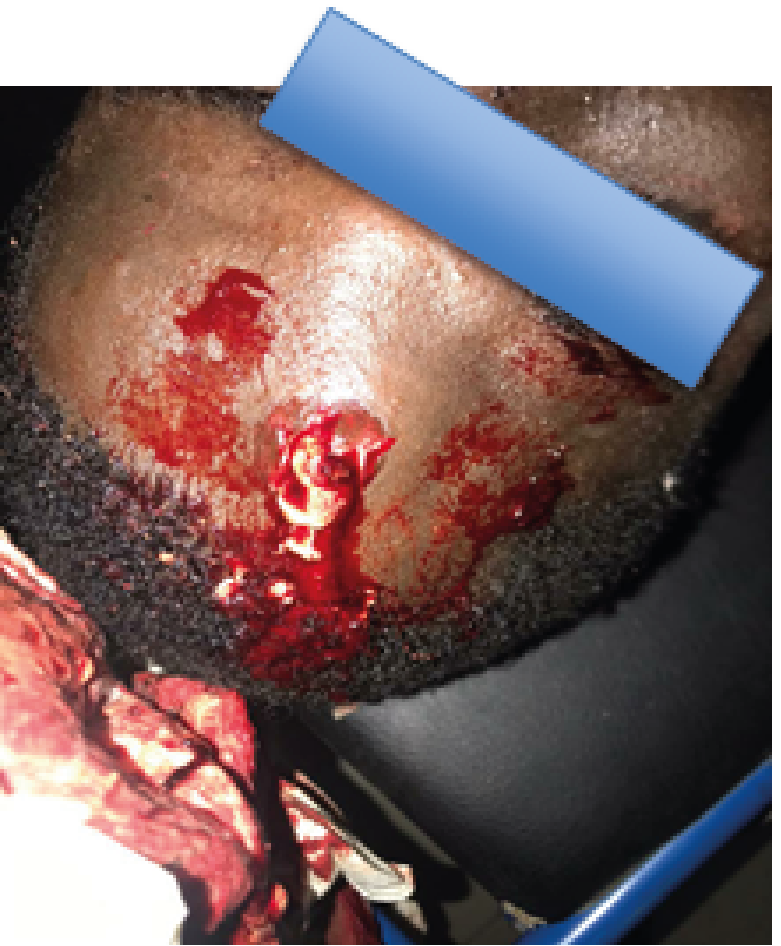 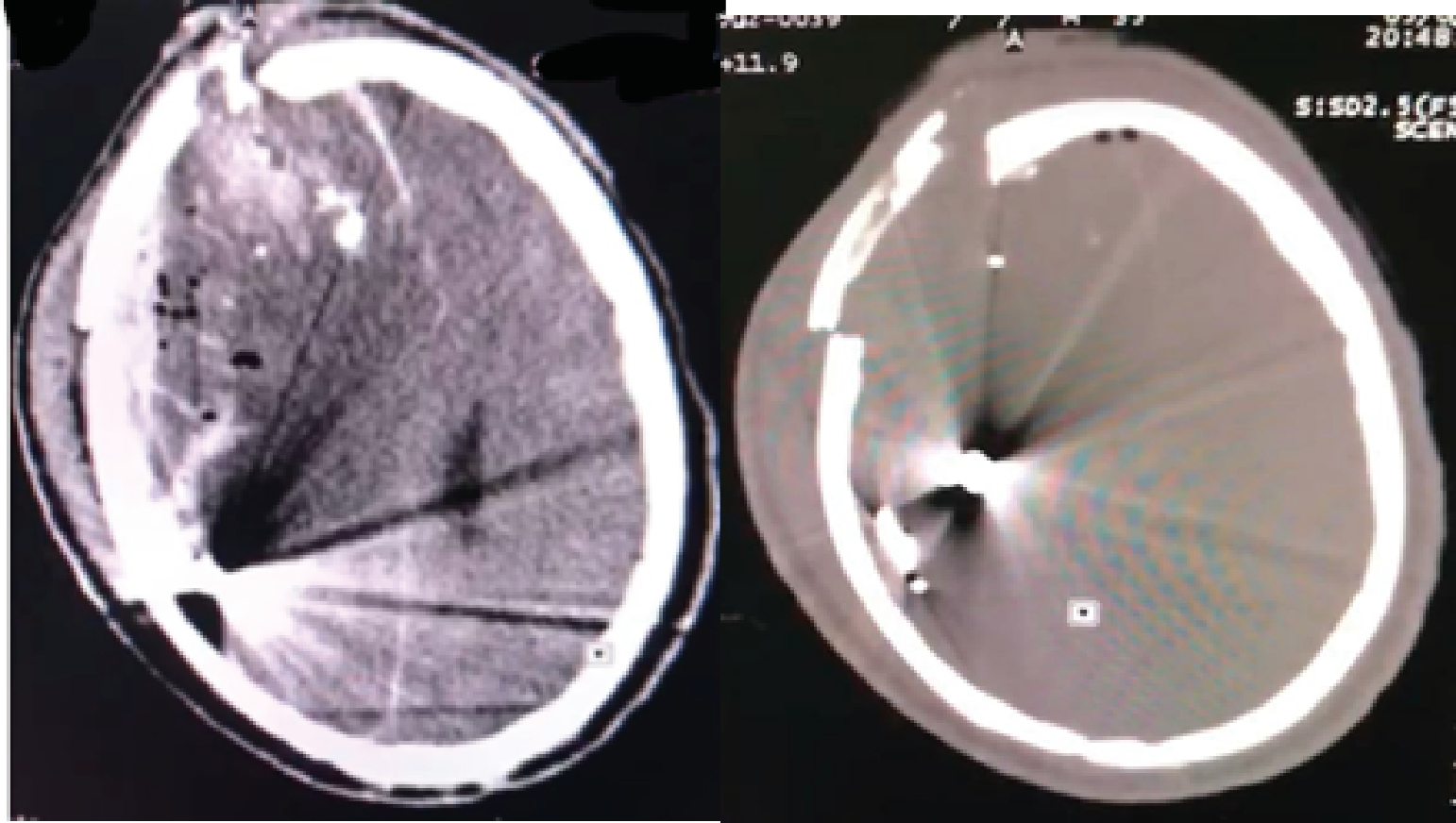 b. Intracranial foreign body on cerebral CT in a bone window with exblemate fracture

The craniocerebral wounds by gunshot is a type craniocerebral trauma that has become frequent in the practice of neurosurgeons nowadays, particularly in developing countries, due un particular to armed conflicts and turmoil. They are associated with a high mortality rate. Among the influencing factors, a low Glasgow score on admission, the presence of multilocular lesions and ventricular involvement are generally associated with high mortality [5]. Our patient was a demonstrator, his Glasgow Coma Scale score was low on admission. During a bullet trauma, the long path of the high velocity projectile has a high destructive potential. With the consequence, the presence of multilocular lesions, damage to the ventricles, vessels due to the anatomical position. The diencephalon and midbrain can also be affected. Thus the loss of such a large part of the cerebral tissue causes a significant edema associated with a high mortality by cerebral herniation secondary to intracranial hypertension [6-8]. Focal lesions such as bruises and contusions also lead to cerebral edema [6, 9]. Our patient had an altered consciousness, in a coma; he presented multifocal lesions with a voluminous perilesional edema. The path of the bullet was right fronto-parietal.

Brain CT is the key emergency exam to be performed to diagnose, locate the bullet and help plan surgery [1].

Regarding the management of craniocerebral wounds, surgery must be performed urgently if the indication is present [5]. The indications for surgery are not well defined. Some authors are in favour of an aggressive operative approach while others are in favor of a conservative attitude, suggesting that the precarious neurological state offered little chance for survival [10, 11]. Surgery is performed strictly in the operating room. It consists of debridement of devitalized tissues, evacuation of the hematoma, ablation of foreign bodies so accessible and bone fragments, finally meticulous hemostasis and dural closure. [12].

The prognosis nonetheless remains bad; the literature suggests that the state of consciousness on admission is the greatest prognostic factor in craniocerebral wounds not bullet [13.14]. Other factors influencing the prognosis are the path of the ball. A bullet that crosses the midline or passes through the ventricles has a poor prognosis. As well as a hematoma associated with the craniocerebral wound [13]. In the case we report a right subdural hematoma and right frontal contusion was associated with the wound with intracranial bullet debris. According to the clinical ans radiological parameters, a conservative attitude was chosen. Unfortunately the patient died in intensive care a few hours after his trauma. A cerebral herniation would be the probable cause of the death following an intracranial hypertension.

Craniocerebral gunshot wounds are becoming more and more common in developing countries as a result of conflict. it is a serious and often fatal condition.  Management should be prompt if there is an indication for surgery.

Ethics Approval and Consent to Participate

This work has been accepted by the ethics committee of the Department of Neurosurgery, Fann University Hospital Center.

Consent to participate has been approved also by the same committee.

Informed consent was obtained from patients involved in this study that they will be involved in research.

All the authors do not have any possible conflicts of interest.

All the authors contributed to this work.

This study is funded by the authors in all aspects (data collection, statistical analysis, and writing the manuscript).

©2021 Cisse Y. This is an open-access article distributed under the terms of the Creative Commons Attribution License, which permits unrestricted use, distribution, and reproduction in any medium, provided the original author and source are credited.

b. Intracranial foreign body on cerebral CT in a bone window with exblemate fracture