The author used his own medical data to investigate the impact on his diabetic retinopathy condition and its risk probability percentage or hazard ratio (HR) over a period of 7-years.

The author suffered from type 2 diabetes (T2D) since 1996. By year 2010, he experienced cardiovascular disease, renal complications, bladder infection, foot ulcer, thyroid disorder, and vision problems. In July of 2010, three of his physicians warned him that he would have three to five remaining years to live. Therefore, he decided to study and research diabetes and its complications in order to save his own life. For the past 10 years, he has spent 30,000 hours on endocrinology with a specialty in diabetes and food nutrition.

The following timetable illustrates the focused area of each stage:

To date, he has collected ~2 million data regarding his medical conditions and lifestyle details. He has written 246 medical papers and made ~120 presentations at ~70 international medical conferences [1-3].

Under the leadership of American Diabetes Association (ADA), a group of 14 authors quoted 137 references to publish a long editorial article, “Perspectives in Diabetes: Diabetic Retinopathy, Seeing Beyond Glucose-Induced Microvascular Disease” [1].

Here is an Excerpt:

The diabetic retinopathy remains the leading cause of vision impairment and blindness. The risk of developing vision loss from diabetes is predicted to double over the next three decades.

The fundamental functions of retina are to capture photons, convert the photochemical energy into electric energy, integrate the resulting action potentials, and transmit them to the occipital lobe of the brain, where they are deciphered and interpreted into recognizable images. Although the retina is easily visible, it is, ironically, the only major tissue affected by diabetes that cannot be biopsied in human.

Established neurobiological principles can inform us how diabetes impairs vision, and metabolism knowledge may lead to new treatments. Retina physiology may underlie its vulnerability to diabetes. The combination of high metabolic demand and minimal vascular supply may limit the inner retina’s ability to adapt to the metabolic stress of diabetes. The pathogenesis of diabetic retinopathy includes glucose-mediated microvascular damage. Although micro vascular changes are undeniably integral to retinopathy, the retina is actually a vascularized neural tissue, not a network of blood vessels. Diabetic retinopathy involves more than elevated glucose and micro vascular lesions. Plenty of evidences for neural retinal involvement in diabetic retinopathy have already been presented.

To the best of our knowledge, there is no evidence that a primary, selective defect in vascular cells is sufficient to cause diabetic retinopathy. Clearly, it is essential to treat both the vascular and neural elements of the retina to preserve vision.

Excess glucose (elevated HbA1C) is the primary culprit in the development and progression of diabetic retinopathy. However, disordered lipid (especially triglycerides) and protein metabolism are also linked to the central biochemical abnormality in all forms of impaired insulin action [2].

This study was conducted in a dynamic cohort of 2,770 type 2 diabetes patients, recruited between April 2005 and July 2013 (~8 years) in Ireland. In this diabetic retinopathy paper, the authors demonstrated that Higher current values of HbA1C, systolic blood pressure (SBP), and triglycerides were associated with increased risk of referral diabetic retinopathy.

Based on the findings from the long editorial article, the author conducted a study on his own diabetic retinopathy development and progression for the past 7-years (2013-2019). He has collected and further calculated the following data categories associated with his own medical conditions:

The data for the top three categories were collected (weight, glucose, and BP) or calculated (i.e. HbA1C, BMI and predicted glucoses) on a daily basis. However, his lipid results were obtained from 22 hospital lab-tests with an average testing period of every four months.

Initially, he listed his lab-tested Triglycerides data, and then extracted data from both measured HbA1C and SBP from his stored database to match the actual dates of his lab-test for triglycerides (a total of 22 dates). In summary, 38,385 data of these 2,555 days (7-years) were used in this study.

Next, he selected the following medical conditions as his baseline conditions (i.e. “normal conditions”) for his risk probability analysis.

Finally, he applied a linear regression analysis model with 7 different cases to conduct his numerical analysis.

In addition, he also applied Cox proportional-hazards regression model to conduct one more set of calculation. The Cox Hazard Model can be expressed as follows:

Figure 1 shows his records of Triglyceride, SBP, and HbA1C, where his SBP curve is expressed with 90-days moving average data. 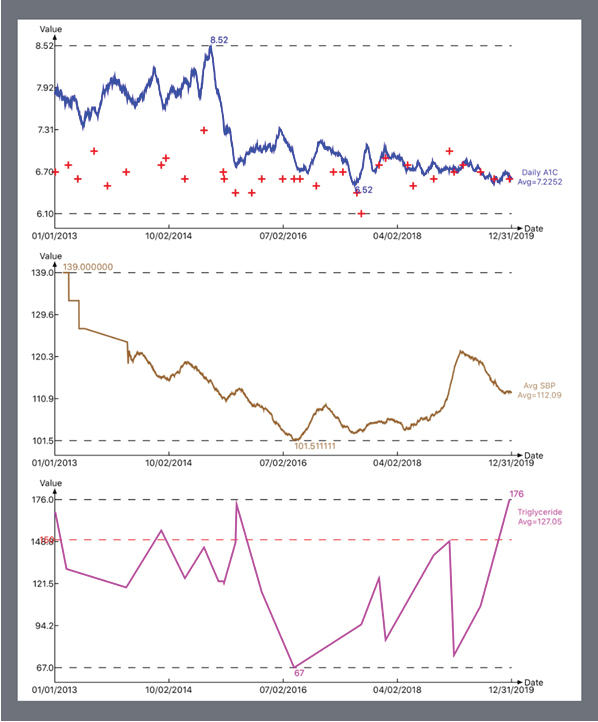 After he matches the dates of both HbA1C and SBP with the actual lab-test dates of Triglycerides, he then normalized those daily medical values by using baseline or normal conditions. These original data and normalized results are shown in Figure 2. 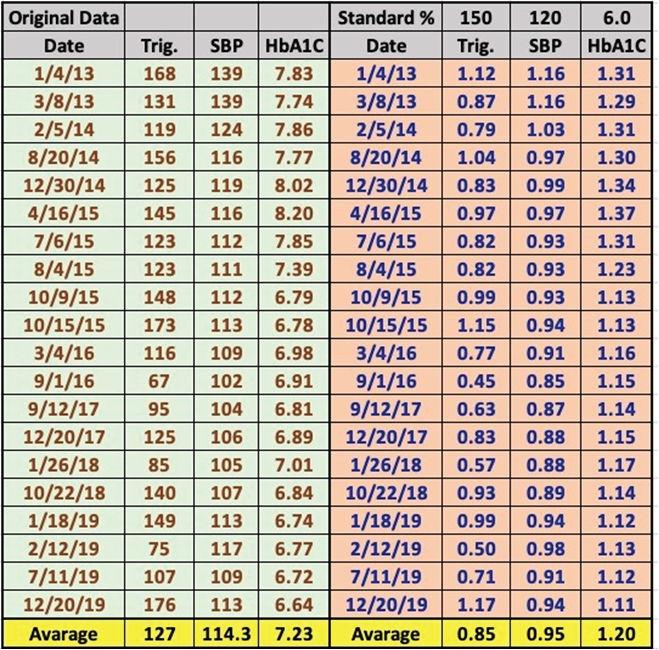 The author could not find the contribution margins (i.e. weighting factors) related to these three primary factors of diabetic retinopathy study (i.e. A1C, SBP, and Triglycerides) from the external references; therefore, he decided to conduct a sensitivity analysis by using a range of possible weighting factors. Figures 3, 4, 5, and 6 reflect the operational results and his seven different cases of weighting factors. 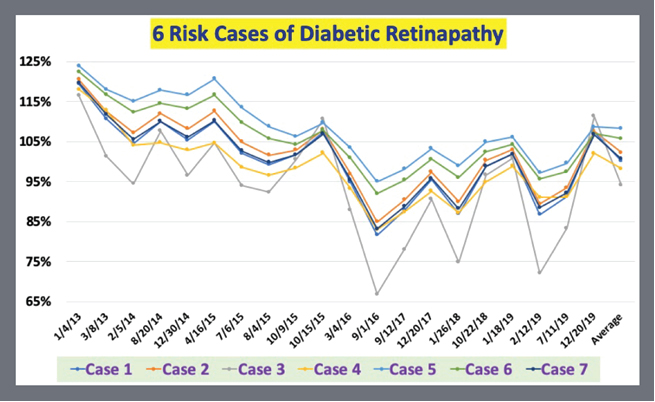 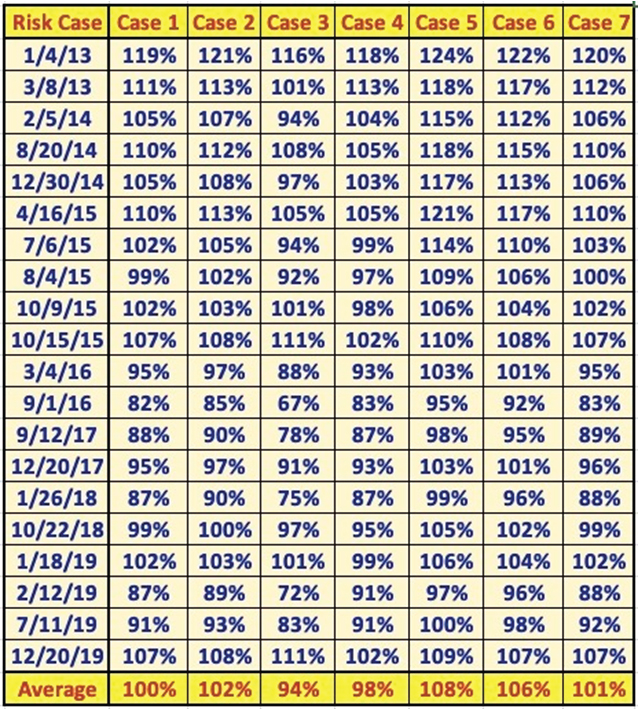 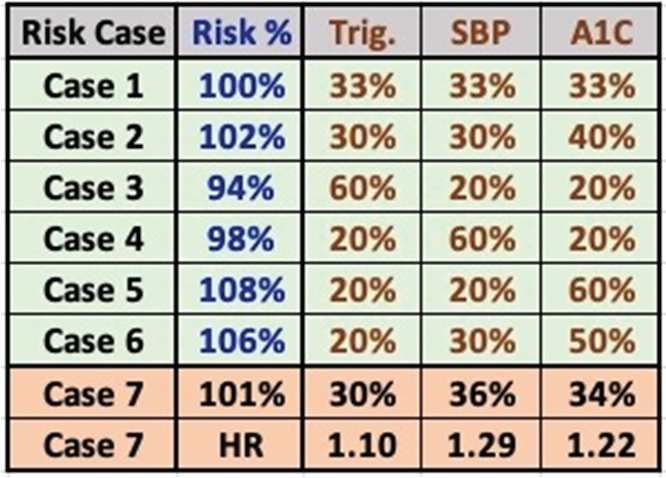 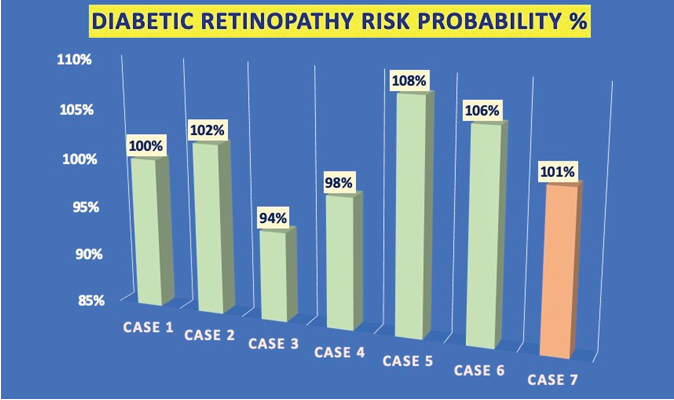 Here is the list of these seven different weighting factors:

Figure: 6 is a simplified Bar chart of risk probability % of these 7-cases. 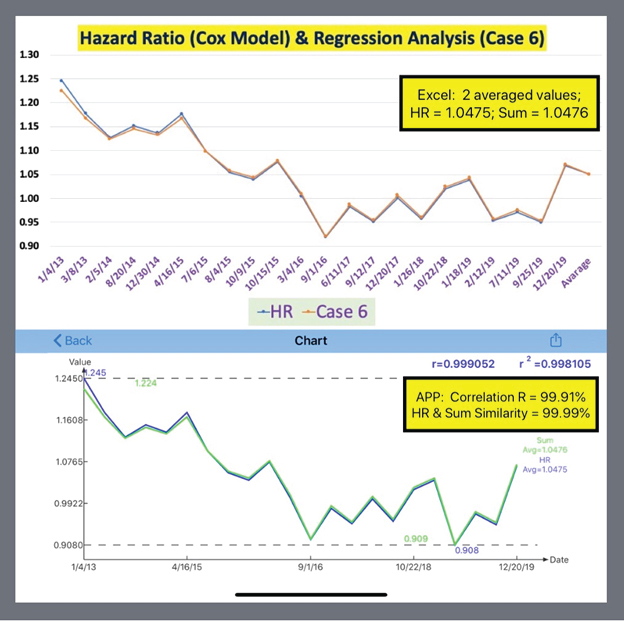 From Figures 3, 4, 5, 6 and 7, we can observe the following conclusive phenomena:

Although lacking available medical test data, in general, he believes his overall diabetic retinopathy progression has slowed down for the past 7-years. His belief matched the trend of this set of curves.

Although both blood pressure and lipids share their responsibility of damaging the retina, based on this specific study, it seems that HbA1C plays a major role of his diabetic retinopathy conditions and developments.

In summary, he applied both linear regression analysis and Cox proportional-hazard model to calculate his “relative” risk probability % and his hazard ratio (HR) using 0.366 as its baseline. The comparison of these two approaches can be seen in Figure 7. Although the absolute values are slightly different on certain test dates, these two curves have an extremely high correlation coefficient (99.991%). These slight numerical differences are a result from HR Model utilizing exponential operation of the risk % value. The most important thing is that they demonstrate the relative risk probability % and relative hazard ratio (HR) of an upper bound Case 6 with an extremely high correlation.

From the diabetic retinopathy sensitivity regression analysis results, it appears that diabetes, in particular HbA1C, plays a more dominating role as the murderer, while both hypertension (SBP) and hyperlipidemia (Triglycerides) play supporting roles as the accomplices. It is no wonder that the medical community calls it diabetic retinopathy! Nevertheless, the combination of these three chronic diseases may definitely cause severe damage to the retina. Furthermore, as stated in Reference 1, diabetic retinopathy is not only a metabolic microvascular blood vessel issue; it is also a serious neuroscientific problem. The author strongly agrees with this viewpoint [4]. In his recent research work of glucose, he has identified the amounts for both fasting and postprandial glucoses’ production and timing are controlled by the brain and neuro-system. He has already proven previously that diabetes itself is also closely related to our brain and nervous system [1].

As pointed out in Reference 1, this particular study may shed some light on using an approach to strengthen metabolic conditions, combination of HbA1C, SBP, and triglycerides in order to improve existing conditions of diabetic retinopathy in the patient [1].