The author describes his 24-year history of type 2 diabetes (T2D) and effectiveness on diabetes control via medications and lifestyle management. In1995, the author began having T2D conditions and started taking metformin three years later.  His physician continued to increase his dosage and added three new drugs to control his elevated glucose level.  From the period of 1991 to 2010, he suffered five cardiac episodes. In July of 2010, his average glucose value had risen to 280 mg/dL; HbA1C was 10%, ACR reached to 116.4, and triglycerides increased to 1,161. He also suffered kidney complications, bladder infection, foot ulcer, thyroid and retinal problems. Although he had been taking the maximum dosages for four different diabetes medications, his glucose and A1C levels were continuously fluctuating with an upward moving trend. In early 2017, he developed a PPG decomposition model using signal processing technique of wave theory from electronics communication engineering and geophysics to identify 19 components of PPG and their respective contribution margins. Major components of PPG waveform are medication, diet, exercise, and weather temperature, and others.  His attached data analysis and computer graphics covered the period starting from 6/1/2015.  Nevertheless, the two important periods of metformin reduction (6/1/2015 - 12/8/2015) and post-medication year (2016) are extremely important to investigate the medication effects. From 2016 through 2019, a four-year period, the importance and effects of lifestyle management can then be clearly observed and studied in detail [1].

By the late 2010, he decided to self-study chronic diseases, particularly diabetes, in order to save his own life. He studied and learned six chronic diseases and the nutrients in food from 2010 through 2013.  From 1/1/2013 until 5/31/2015, he continuously reduced and then terminated three different kinds of diabetes medications, except metformin. Meanwhile, he spent the entire year of 2014 to develop his own mathematical metabolism model to identify and calculate those inter-relationships among chronic diseases and lifestyle details. On 4/11/2015, he developed a body weight prediction model and on 6/1/2015, he also developed a postprandial plasma glucose (PPG) prediction model. Based on this in-depth understanding of PPG, he decided to reduce his metformin’s dosage from 1500 mg to 250 mg (half of a 500 mg tablet) and finally stopped taking any diabetes medication by 12/8/2015 [2]. 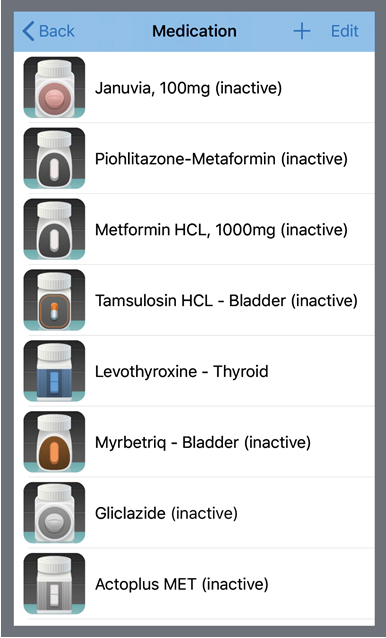 Figures 3, 4, and 5 reflect PPG with its sub-waves of medication, diet, and exercise. Although medication provided -21 mg/dL on PPG in June of 2015 and dropped to ~0 mg/dL on PPG in December of 2015, the combination of diet and exercise still could not bring his PPG down fast enough (from 149 mg/dL to 120 mg/dL). This was probably due to his insufficient knowledge on glucose and lack of control at that time.  Nevertheless, these three diagrams have demonstrated the effectiveness of medication on the control of diabetes symptoms. By solely being on medications, T2D patients could become dependent and not motivated in having an effective lifestyle management, which is psychological.  By observing the period after 2016 from these three diagrams, lifestyle management can be as effective as taking medications.  However, in reality, most patients enjoy eating and hate exercising; therefore, this is a difficult barrier to overcome. As a result, this is probably the reason patients prefer having the option of taking medication [3]. 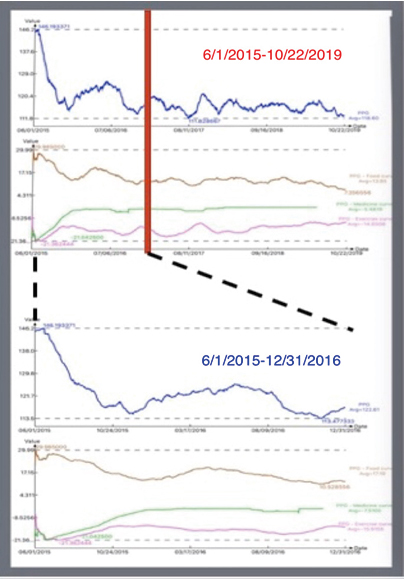 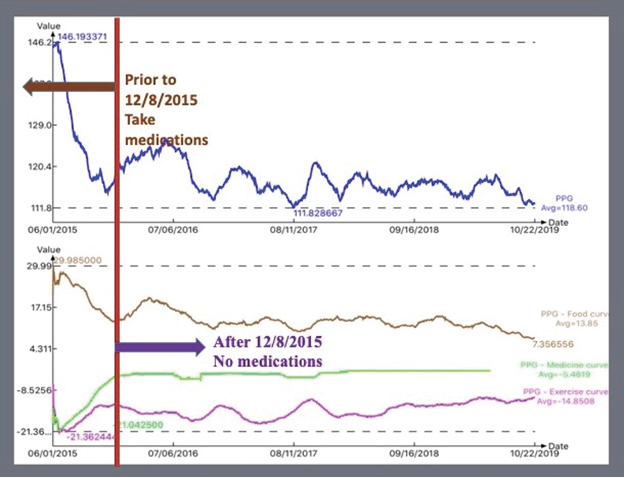 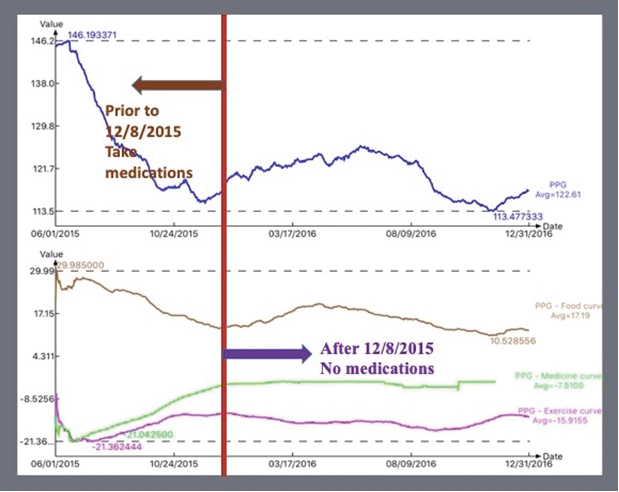 Figure 6 shows the PPG wave and sub-waves of diet, exercise, and medication between 1/1/2016 and 12/31/2016.  It is obvious that medication still contributed -0.2 mg/dL on PPG formation. The reason was that he occasionally took small dosages of metformin when his PPG was high. On the other hand, his lifestyle management took over his PPG formation, whereas his diet contributed +15 mg/dL and exercise contributed -16 mg/dL. This combined effect has maintained his PPG level around 120 mg/dL without any influence from medication after 1/1/2016. 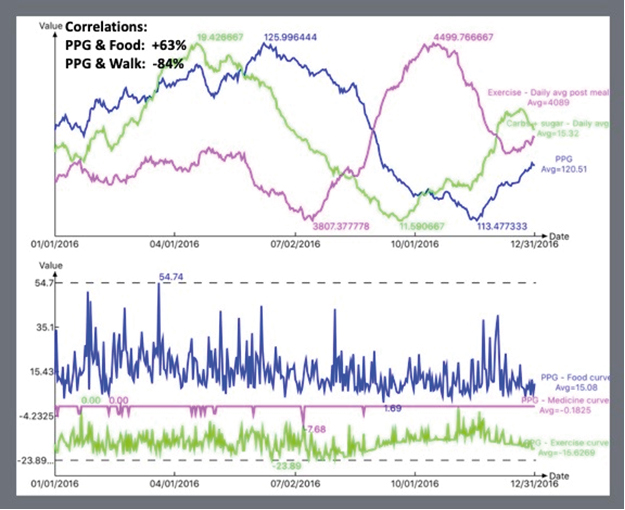 From this case study, we can conclude that life management can be as effective as medication to control T2D conditions or at least the symptoms of diabetes. However, an effective lifestyle management requires sufficient knowledge and strong determination with persistence on both diet and exercise. For the majority of patients, taking medications is an easier approach when compared to lifestyle changes.  That is why so many medications have been prescribed to many patients as an effective way of controlling their diabetes symptoms [4].