Introduction: Lower limb trauma is one of the most common injuries in traffic and occupational accidents. The anteromedial surface of the tibia is particularly susceptible to injury. Muscle flaps can produce very good results without compromising functionality.

Case Report: We present a clinical case of a patient that sustained an injury to the middle third of his left leg that eventually caused significant tibial exposition. The soft tissue defect was successfully covered with a medial hemisoleus flap and a split thickness skin graft. One-year post-op the wound remains closed with no areas of integument instability.

Conclusion: We believe the hemisoleus flap is a very good treatment option for middle/ lower third leg defects. It produces a stable reconstruction with minimal morbidity and with reduced costs. It should be regarded as an alternative option to free flap reconstruction.

Lower limb trauma is one of the most common injuries in traffic and occupational accidents. Bone exposition frequently develops after trauma and there is an urgent need to cover these defects to reduce the incidence of osteomyelitis [1]. Soft tissue coverage can be accomplished by a great variety of techniques. Nowadays, most authors propose using free tissue transfer. Using local tissue (either muscle, adipofascial or fasciocutaneous) can produce very good results without compromising functionality [2]. We present a clinical case of a patient submitted to a reconstruction with a medial hemisoleus flap and a skin graft.

We report the case of a 50-year-old man, construction worker, who sustained a traumatic injury to his left leg (crushing injury) that caused skin necrosis of the anterior surface and ultimately led to a significant tibial exposition (Figure 1). The patient was a heavy smoker (2 packs of cigarettes per day), had hypertension and poor personal hygiene. The patient requested the medical team for a treatment solution that would enable him a fast return to work. We opted to cover the defect with a hemisoleus flap and a split thickness skin graft. 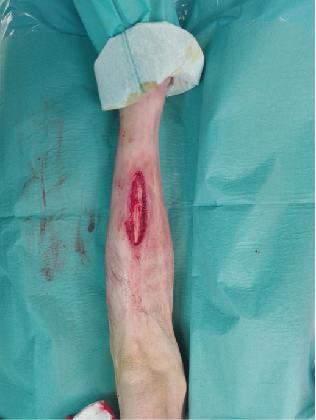 Figure 1. Lesion in the antero-medial aspect of the leg.

We approached the leg medially, beginning the incision approximately 2 cm below the level of the defect. Then we proceeded with the identification of the medial hemisoleus and dissection in the plane between the soleus and the gastrocnemius. After having separated the two muscles, the hemisoleus was divided distally above the Achilles tendon. We only included the muscular portion of the hemisoleus in the flap. The unaffected tendinous part was sutured to the remaining tendon with nonabsorbable sutures. The hemisoleus was then proximally split longitudinally along the median raphe between the two muscle bellies. The muscle flap was elevated only to a point where it reaches the area to cover without tension (Figure 2). It is essential to preserve as many perforators from the posterior tibial artery as possible to ensure a good vascularization of the flap. 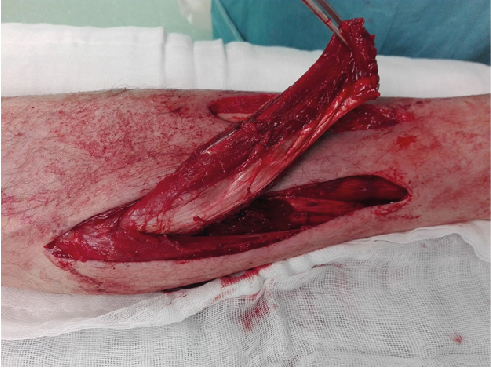 We tunnelled the muscle flap subcutaneously to reach the anterior surface of the leg (Figure 3A). Flap insetting was done with absorbable sutures. A split thickness skin graft (harvested from the thigh) was applied on top of the flap for coverage. An active drainage system was applied and the wounds were closed with staples (Figure 3B). At the end of the procedure a suropodalic cast was applied to maintain the tibiotarsal joint at a neutral position. 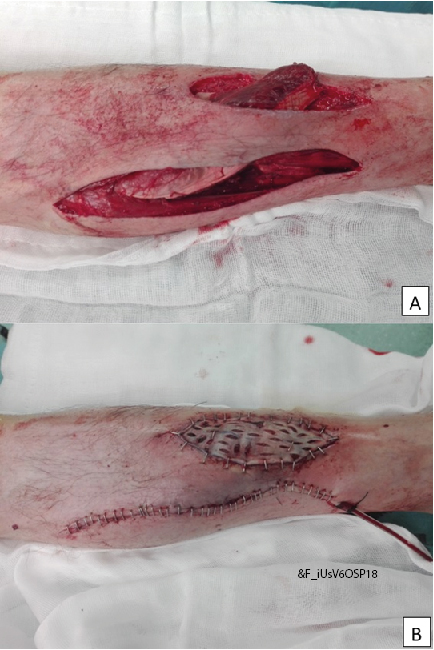 Figure 3. A - Tunnelling of the flap; B - Final result intra-operatively including skin graft.

The first dressing was done 5 days post-operatively. The muscle flap was completely viable but the skin graft had a partial take. This minor complication was managed conservatively with dressings 3 times per week and healed by second intention in three weeks. The cast was removed 10 days post-op. After complete wound healing the patient started rehabilitation of his lower limb. He returned to work 3 months post-op.

1 year after surgery the wound remains closed with good scarring and no areas of integument instability (Figures 4A, 4B). The aesthetic result is acceptable and the patient kept full mobility of his leg and foot without any complaints. 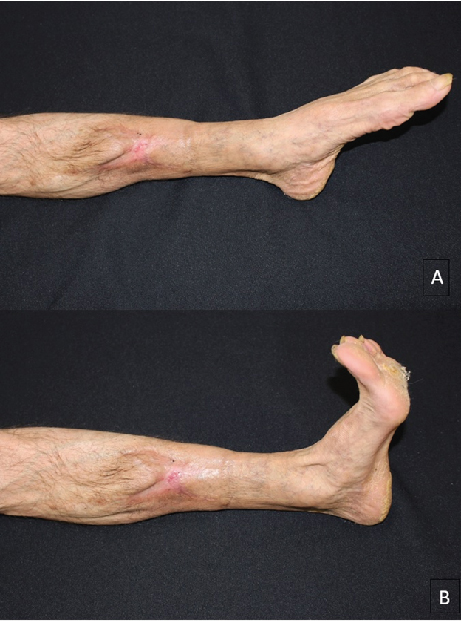 Bone exposure in the lower limb is a common problem after high-energy traumatic injuries. Nowadays, reconstruction with free flaps is considered the gold standard in most reference centres worldwide. To perform free flap surgery there are several things that need to be guaranteed. Surgeons need to have highly technical skills, there needs to be adequate equipment and an operating microscope available, the nursery staff needs to be experienced in the surveillance of the flaps and there should be an available team (medical and nursing) always ready to return to the operating theatre in case of problams [3-5]. Other important factors are the patient’s comorbidities and personal preferences. In this case the patient manifested his desire in spending the shortest period possible in the hospital and quickly returning to his previous work. We had to pick a treatment solution that was safe and provided a good and stable coverage of the wound. We opted to perform a medial hemisoleus flap and a partial thickness skin graft.

This solution has several advantages: ease of dissection, short operating time, reliable and stable coverage sparing intact anatomic areas [3-6]. The patient is quickly discharged to his home and can begin brief periods of assisted walking with crutches as soon as the second week after surgery.

Many authors have highlighted that sacrificing an entire muscle of the superficial posterior compartment of the leg results in a decrease of strength especially during uphill gait [7]. Nonetheless, when only half of the muscle bulk is utilized the morbidity is minimal.

The main disadvantage of this flap in our opinion is the conspicuous scar of the graft. For this reason, it is not our first choice treatment in female patients. Obviously, in cases of trauma to the medial aspect of the leg the soleus muscle might be injured and this flap should not be attempted due to a high risk of failure [8].

There were other local options available for this coverage but we felt all of them were inferior to the one chosen. Split tibialis anterior flap was a possibility but the defect was quite big and it was risky to advance the muscle without compromising its viability. This flap is ideal when the muscle is already exposed [9]. Medial gastrocnemius was other possibility, but it would be very difficult to cover the lowest portion of the wound and the aesthetic result would also be worse because these flaps usually produce a very bulky reconstruction. Some authors also report good results with the application of a dermal regenerative matrix [10]. Although this might be an effective solution it is expensive, it would require at least two surgeries and the patient had to follow a very strict post-op regimen.

We believe the hemisoleus flap is a very good treatment option for middle/ lower third leg defects. It produces a stable reconstruction with minimal morbidity and with reduced costs. It should be regarded as an alternative option to free flap reconstruction.

Informed consent was obtained from the participant included in the study.

The authors declare that they have no conflict of interest.

No financial support was received for this study.

©2019 Ribeiro LM and Correia C. This is an open-access article distributed under the terms of the Creative Commons Attribution License, which permits unrestricted use, distribution, and reproduction in any medium, provided the original author and source are credited.

Figure 1. Lesion in the antero-medial aspect of the leg.

Figure 3. A - Tunnelling of the flap; B - Final result intra-operatively including skin graft.