Conclusion: This study provides empirical evidence on the need to improve the quality of surgery, which will benefit patients and hospitals. It also highlights the importance of providing additional rewards to reduce postoperative complications.

In Japan, the medical fee system for acute care is guided by the Diagnosis Procedure Combination/Per Diem Payment System (DPC/PDPS). The rationale behind this system is that hospitals provide acute care to patients with a high awareness of the management of the length of their stay (LOS). This is in addition to providing a clinical diagnosis and medical treatment.

The DPC/PDPS is not designed to provide direct incentives to acute care hospitals and reduce the incidence of postoperative complications related to colorectal cancer. This system is merely a mechanism that indirectly improves the quality of acute care by providing incentives to ensure that the patients are discharged early.

This study analysed the medical claims of 3,643 patients diagnosed with malignant tumours in the colon in 24 hospitals in Japan (Figure 1). 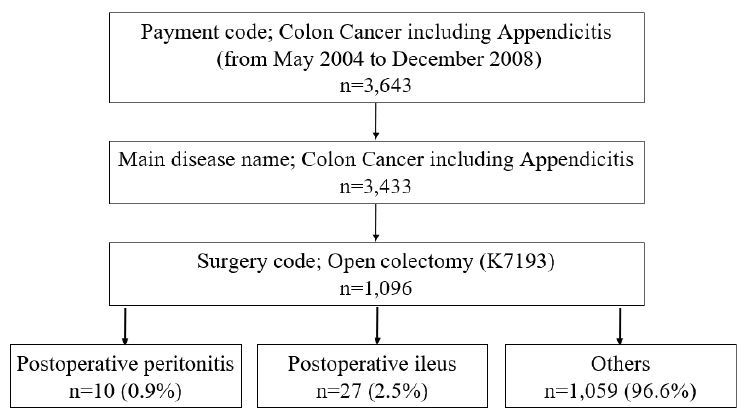 Among them, 1,096 patients (male: n=601, female: n=495) had undergone an open colectomy-verified by checking their medical records. According to the medical fee code, open colectomy is classified as a major diagnostic category for a malignant tumour of the colon. The data contained outcomes ranging from ‘complete recovery’ to ‘death of the patients’. The data collection period ranged from May 2004 to December 2008. This period corresponded to the initial stage of DPC/PDPS enforcement. Thus, it covered the medical treatment provided under the new national medical service fee system at the time. Therefore, the changes in the system may have had some impact on patients’ LOS. Although the data is old, the diagnostic criteria of patients requiring surgery for an open colectomy remain fundamentally unchanged [7, 8]. This study was approved by the Ethics Review Board in the International University of Health and Welfare, Japan.

The distributions of patients’ ages and LOS were analysed using the Kolmogorov–Smirnov test. They were divided into ‘positive’ and ‘negative’ groups with and without complications for both variables: postoperative peritonitis and postoperative ileus. When equal variance could not be assumed, pairwise comparisons of the means of the groups were conducted using Welch’s t-test. Levene’s test was used when appropriate.

The Kaplan–Meier survival analysis was used to estimate the cumulative probability of hospital stay for each group of patients irrespective of whether they exhibited complications. Pairwise comparisons of the positive and negative groups of patients with and without complications among the variables were conducted using the log-rank test. The event for starting to follow a patient indicates the probability of discharging from acute hospitals or their acute care beds.

a After conducting the stepwise multiple regression analysis, a power analysis was performed.a IBM SPSS 26.0 J for Windows was used to conduct the analyses.

Table 1 shows the patients’ descriptive statistics. Although open colectomy is associated with a high risk of complications due to its invasive nature, only 337 patients showed a high severity of illness (pathologic stage III, 21.1%; stage IV, 9.7%). Furthermore, only 66 patients underwent additional treatment through central intravenous injection (3.2%), radiotherapy (2.6%), and chemotherapy (0.2%). The LOS average increased with age. The mean and standard deviation of the LOS is 24.84 ± 12.25.

Table 1: Descriptive statistics of the patients

Pairwise comparison between the groups exhibiting the two complications, namely postoperative peritonitis and postoperative ileus, shows that the LOS average was significantly longer in the positive group than in the negative group (Table 2).

Table 2: Descriptive statistics of the length of hospital stay by the occurrence group of their complications

The two complications were analysed to estimate their effects on the LOS. The resulting estimation formula was obtained by stepwise multiple regression:

Table 3: Estimated effect of the complications on the length of hospital stay

Finally, the cumulative probabilities of hospital stay for patients with and without postoperative peritonitis and postoperative ileus were calculated. The results confirmed that the cumulative probability of hospital stay for the positive group was significantly higher than that of the negative group. The details are as follows: 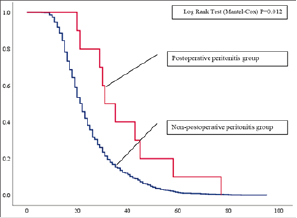 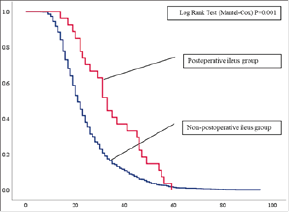 The data on colon cancer in patients who underwent open colectomy was analysed retrospectively. To establish the relationship between the LOS and the two complications: postoperative peritonitis and postoperative ileus.

Previous studies have shown that the most frequent postoperative surgical complications observed after colorectal resections were postoperative peritonitis. They are mainly caused by a surgical site infection via anastomotic leakage and postoperative ileus, which can arise from intestinal dyskinesia due to intestinal paralysis or dilation through open surgery. Patients with these complications tend to have a prolonged hospital stay [2-6]. The risk of complications is higher in older patients [10]. Compared with younger patients (≤65 years old; n=211), older patients (>65 years old; n=235) suffer more from ileus, peritonitis or septic shock, pelvic abscesses, and wound infections. The occurrence of postoperative ileus prolonged the patients’ LOS by 29% (n=3,115) [6]. This is like the findings of this study.

Previous studies have not shown a cumulative probability of hospital stay due to complications. As expected, the results of this study showed that the occurrence of postoperative peritonitis and postoperative ileus significantly prolonged the LOS. Patients’ age (≥80 years), severity (pathologic stage III and IV), and receipt of radiotherapy as treatment also prolonged the LOS. The effect was significant (p<0.05, p<0.01, and p<0.01). The findings with respect to age correspond to those of previous studies [2-6, 9-11]. The findings related to age and radiotherapy reflected the clinical features of the patients. These were specified in the DPC/PDPS as the factors that prolonged the LOS. The severity level was determined by the clinical decision of whether surgery was possible. It has also been reported that the prognosis after colectomy was effective even in patients with stage III tumors [9, 10]. However, cancer treatment has been clinically determined in recent years in terms of the survival effect and quality of life (QOL). Therefore, the results of this study may differ from the current clinical judgment.

The results obtained in this study are medically explainable because postoperative peritonitis is mainly caused by surgical site infection and anastomotic leakage [2-6]. Postoperative ileus is primarily caused by intestinal dyskinesia due to intestinal paralysis or dilation through open surgery [2-6]. Although the anastomosis method and the device used during open colectomy have improved, the incidence of complications is still not low [1-4]. Thereby, it must be verified with new data.

Regarding the quality of the surgery, it should be noted that postoperative peritonitis and postoperative ileus prolonged patients’ hospital stay and increased their cumulative probability. A previous study reported several hospital caseloads affected complications, local recurrence, and survival rates [11, 12]. One study showed that low surgery volumes were associated with increased complications, recurrence, and lower survival rates in Norwegian patients with colon cancer (n=3,388). Moreover, patients who underwent surgery in a ‘high-quality hospital’ had a satisfactory prognosis. By contrast, ‘low-quality hospitals’ missed the quality standards of various measures of outcome (anastomotic leakage, postoperative mortality, recurrence, and long-term survival) [11]. In addition, another study showed that the local recurrence rate was 10% among surgeons with a high volume of surgeons, while it was 21% for low volume of surgeons (n=2,815) [12]. These studies implied that surgeons’ experience or volume of surgery in hospitals is the most crucial unit of volume for the prognosis of patients with colon cancer.

If surgeons’ experience or volume of surgery in hospitals contribute to the prognosis of patients, including a shortened LOS, it is necessary to design a framework to enable hospitals to accumulate a higher number of caseloads. Although DPC/PDPS is designed as a medical reward to promote shorter hospital stays, it should ideally promote quality improvement by incorporating ‘quality level of surgeries’ into the medical reward. Consequently, this will encourage surgeons and hospitals to provide high-quality surgeries and perform surgeries aggressively, including perioperative care [13]. If surgeons and hospitals are currently unable to provide high-quality surgeries, they will either avoid performing surgeries or improve the quality of surgeries to perform successful surgeries. Therefore, it is important to set additional rewards for high-quality surgery in medical fee systems to reduce the occurrence of postoperative complications ultimately.

This study had some limitations. First, the outcome of open colectomy may have improved due to introducing a new anastomosis method and device. In such a case, the implications of these results will be weakened. Second, high-quality surgery does not always contribute to the prevention of postoperative peritonitis and postoperative ileus. The risk of surgery is a function of many factors [3], those associated with a patient’s health, such as diabetes mellitus and body mass index [4], and perioperative care, such as that provided by the Surgical Support Team [13]. In addition, there was a lack of indicators to conduct a more accurate analysis. This includes a lack of information on anatomic problems, the American Society of Anaesthesiologists physical status classification, the Clavien-Dindo classification, and surgeons’ experience [13]. Finally, the results cannot be generalized for all population groups in Japan. One criticism may be that the variables in this study were selected according to the hypothesis because it is a retrospective study. However, considering that this study estimated the effects of complications based on data collected from 24 acute care hospitals, the explanatory power of the results is valid. Therefore, it is necessary to re-examine the study variables in the context of Japan’s national data.

©2022 Konno H. This is an open-access article distributed under the terms of the Creative Commons Attribution License, which permits unrestricted use, distribution, and reproduction in any medium, provided the original author and source are credited.

Table 1: Descriptive statistics of the patients

Table 2: Descriptive statistics of the length of hospital stay by the occurrence group of their complications

Table 3: Estimated effect of the complications on the length of hospital stay