The neurological manifestations of the pandemic during coronavirus (COVID-19) has attracted the attention of several authors including stroke However, cases associating an hemorrhagic vascular  accident on Moyamoya angiopathy to covid19 viral pneumonitis have only been rarely reported in the worldwide, and this was the first case reported in Morocco.

Any infection like SARS Cov-2, could precipitate the onset of the angiopathy of Moyamoya. However, the exact pathogenesis remains to be elucidated; the potential mechanisms may be related to the increase of cardioembolic events; an infectious process and hypercoagulability state in COVID-19.

We will first present the case; of a parturient with SARS CoV-2 who developed a Moyamoya Angiopathy and suffered an intracerebral hemorrhage. We will then discuss the management issues related to this situation.

Neurological manifestations of the ongoing pandemic of coronavirus disease 2019 (COVID-19) have drawn significant attention in recent times, including a high incidence of acute strokes [1]. However, stroke associated with Moyamoya angiopathy has not been reported with new severe acute respiratory syndrome coronavirus (SARS-CoV-2) infection.

We report a case of a 38-year-old patient with two children who was pregnant with an active 28-week gestation period. The patient initially went to a local hospital for a of dry cough and dyspnoea ; the clinical examination found a  respiratory distress with a respiratory rate of 26 cycles per minute , a labial cyanosis,  and signs of respiratory failure . The SpO 2 was at 40% in ambient air (AA) and 90% under mask at high concentration. Regarding this symptomatology an RT-PCR of the nasal swab was carried out and came back positive for COVID-19. Following the worsening of her respiratory condition, the patient was transferred to the maternity ward where she received an emergency cesarean section for maternal rescue. 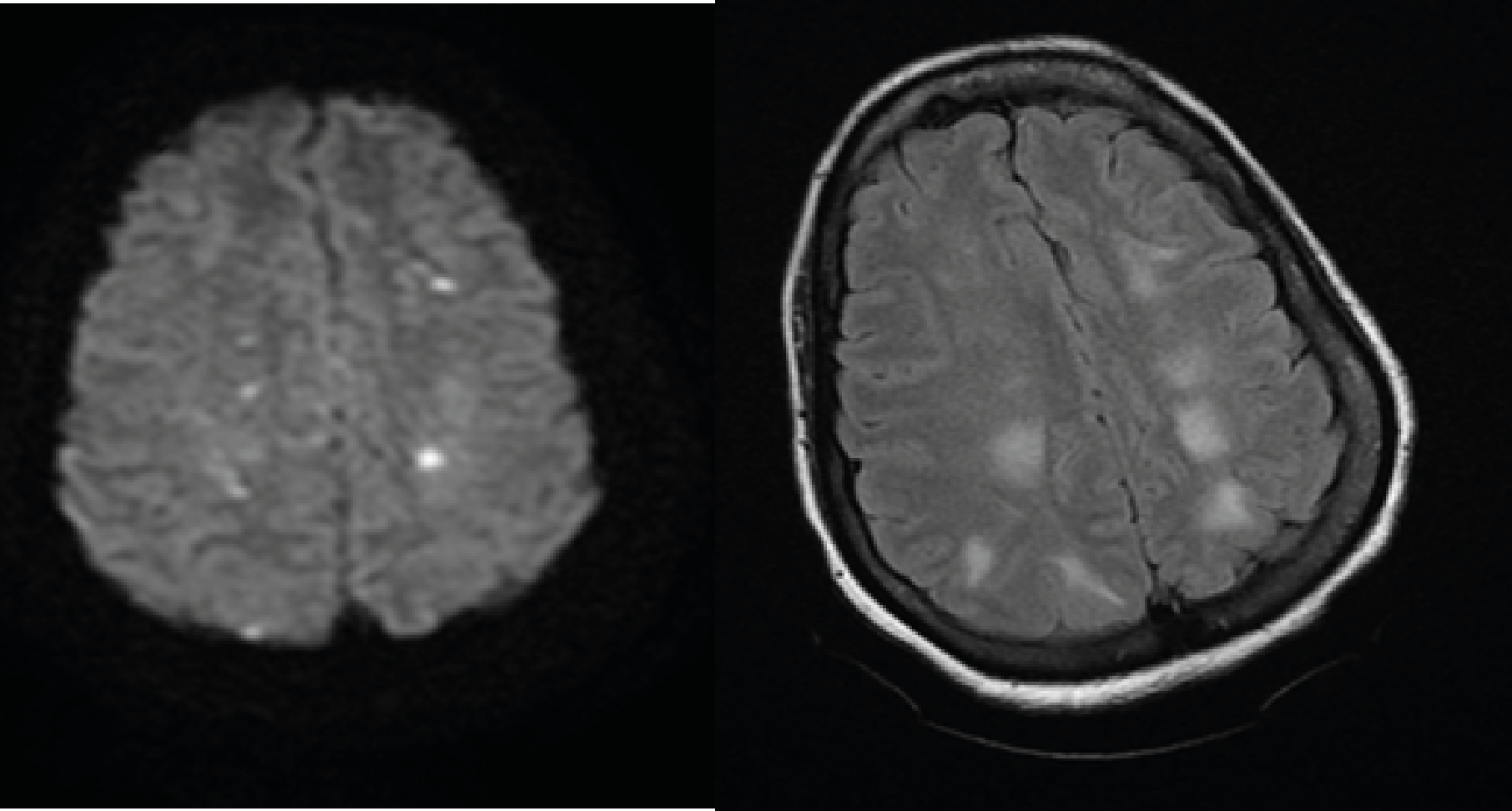 Figure 1.MRI Showing Multiples Hyperintense areas in Diffusion Weighted Sequence (A) and Flair (B) which is related to watersheds infarcts

The operation was performed under general anesthesia with rapid sequence induction resulting in extraction of a premature male newborn that had an Apgar at 07/10. Postoperatively, the patient was transferred in intensive care for additional support. On the admission in the intensive care unit, the patient was intubated under ARDS mode (Vt at 6ml / kgof PIT, PEP at 8cmH 2 O, FR at 22 cpm, FiO 2 at 80%). Neurologically, the patient was sedated with midazolam 100μg / kg / h and fentanyl 2μg / kg / h with symmetrical and reactive pupils [2].

Hemodynamically; she had a good blood pressure at 119/72 mmHg, heart rate (HR) at 106 beats per minute (bpm). The CT-Scan was then realized and assesses a bilateral ground-glass opacity which occupies nearly 75 percent of the total lung volume. The ECG showed a sinusal tachycardia at 110 bpm, whereas the echocardiography showed an undilated left and right ventricle (LV) with EF at 60%, and PAPS estimated at 32 mmHg, the inferior cave vein was at compliant at 18mm. 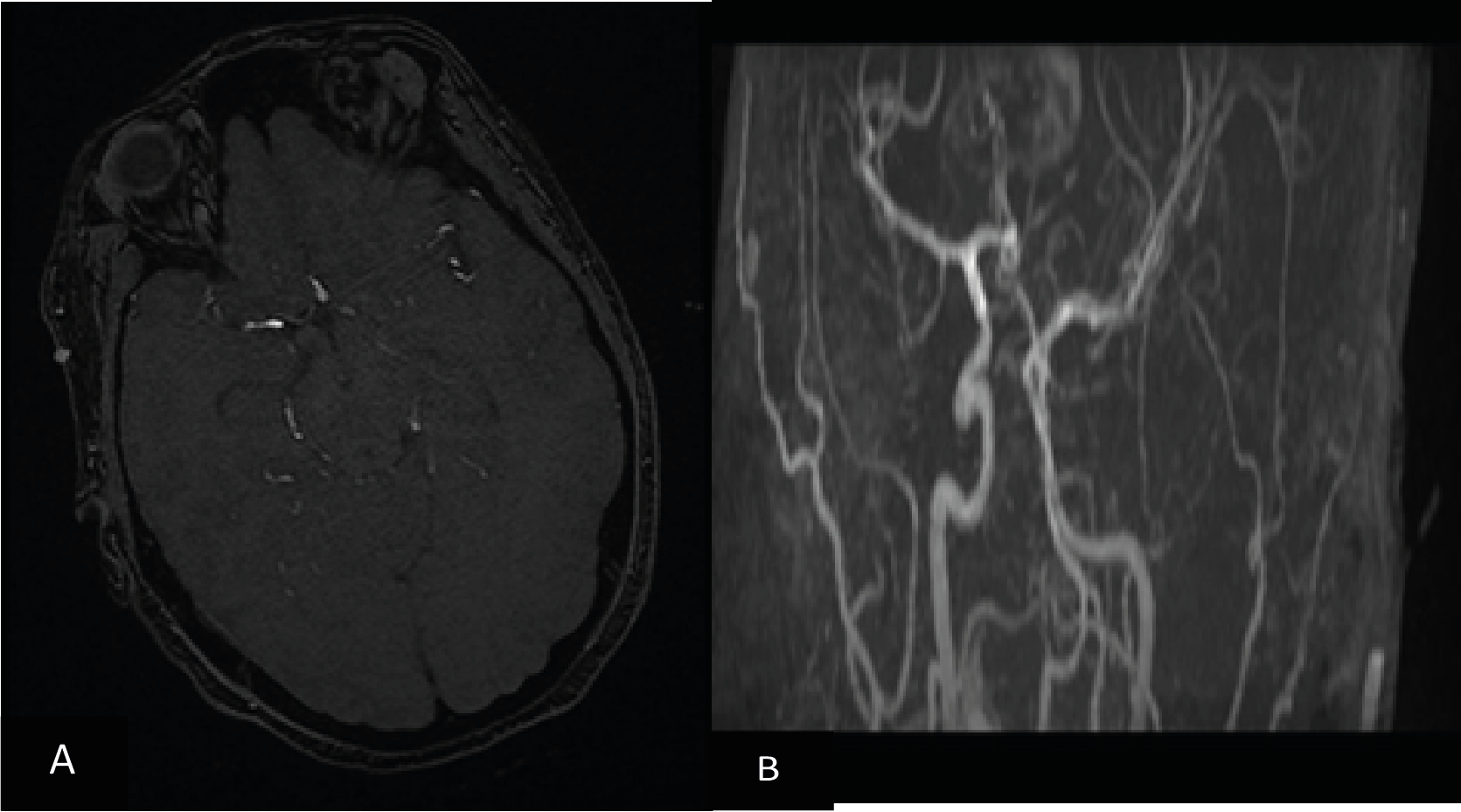 Figure 2.  Angio MR sequence showing a slender aspect of the polygon of Willis

The urine dipstick was negative and the 24 hour proteinuria was negative for a diuresis of 2100ml, the hemolysis and thyroid tests were correct and an immunological assessment made of antinuclear Ac, anti-native DNA and antiphospholipid Ac was normal. Resuscitation management was to pursue the protective   ventilation with a  treatment based on ceftriaxone 2000mg per day low molecular weight heparin preventive dose, amino salicylic acid dose , antiaggregant, methylprednisolone 80mg per day, an inhibitor of the pump proton, vitamin C ,  D and zinc associated with motor physiotherapy daily, nursing care and enteral nutrition.

On day 11 of hospitalization, when we had started ventilatory weaning after 24 hours of sedation stoppage in an awakened patient, she presented a generalized tonicoclonic seizure that led to the realization of brain CT scan with injection (figure 3). 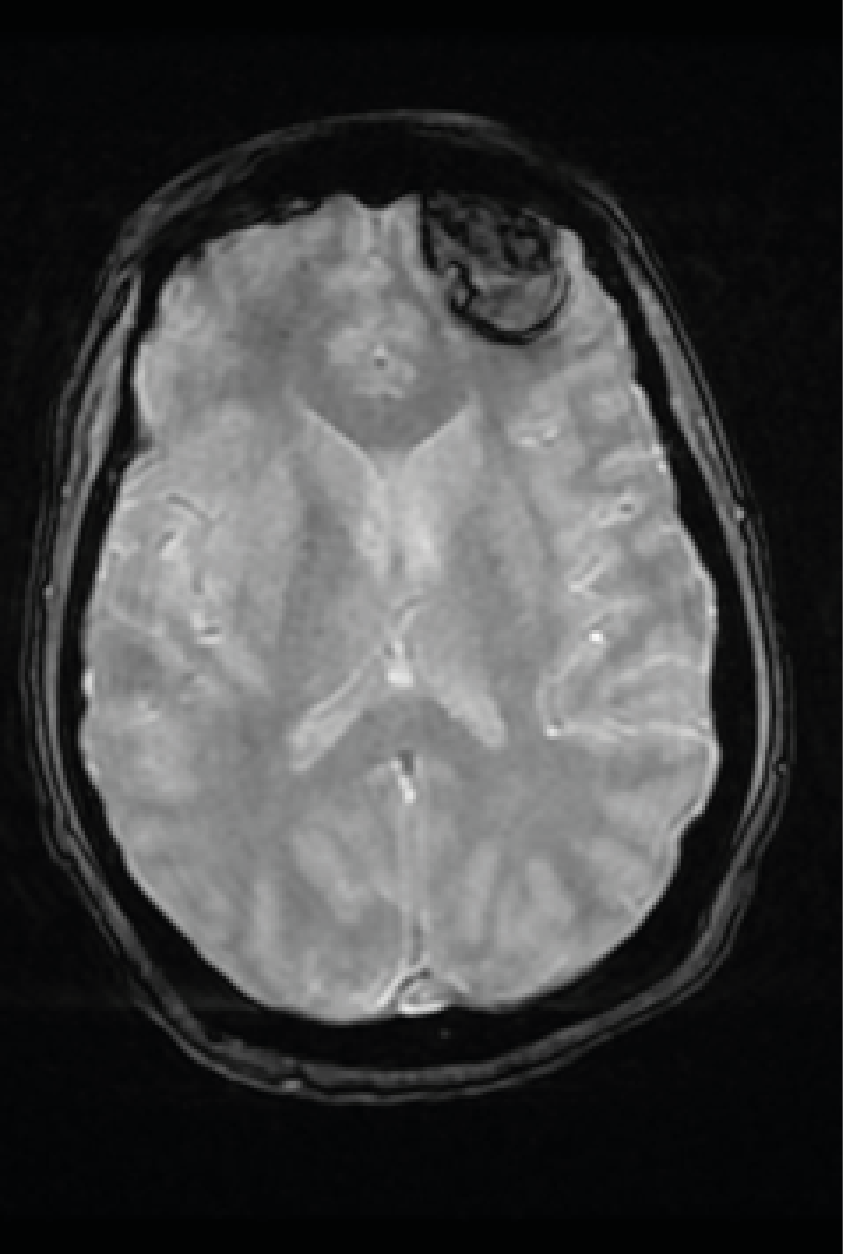 It showed a left frontal parenchymal hematoma measuring 3.9 x 2.2x 1.7cm with slight perilesional Edema without neurosurgical indication what motivated the stopping of all of anticoagulation therapy and taking sodium valproate LP 500mg per day. After a pluridisciplinar concet, an MR-cerebral angiography was indicated and has shown these following features:

All those findings allow us to evoke a Moya-Moya syndrome. The evolution was marked by a marked clinical and biological improvement

Whereas FR was at 18cpm and the patient was extubated on D21 of hospitalization.

Three days after the extubation, the questioning raised the notion of previous chronic headaches relieved by level I analgesics. Then She was transferred to neurology being conscious and oriented with a Glasgow at 15/15, reactive and symmetrical pupils, an effective cough and swallowing reflexes without sensitivomotor deficit except a slight muscle weakness of 4/5 in distal extremity of the limbs   and 3/5 in proximal which is probably due to a critical illness neuromyopathy which cannot allow her to stand properly without help. Also she was hemodynamically stable with Blood Pressure at 132/83 mmHg, HR at 70 bpm and on the respiratory level she had SpO 2a 98% at AA, and FR at 16cpm.

The Moyamoya syndrome is a rare cause of intracranial bleeding during pregnancy The most common causes are aneurysms ruptured arteries and arteriovenous malformations.

These factors, as well as the pre-eclampsia and eclampsia, may predispose pregnant patients with Moyamoya disease to intracerebral hemorrhage.

Any kind of vascular inflammation is expected to lead to a hyperplasia and pathological remodeling of smooth muscle cells vascular, germination of endothelial cells leading to angiogenesis which announces a narrowing of the lumen and formation collateral. The increase in inflammatory cytokines like this occurs produced in the "cytokine storm" induced by SARS-CoV-2 may influencing certain poorly understood process leading to angiopathy of Moyamoya [6].

Recently, CTA and MRA have been widely accepted for diagnosis and evaluation of MMD and MMS. Computed tomography angiography is especially helpful in patients who are presented to the emergency department with suspected complications due to vascular abnormalities. Compared with the DSA, both of CTA and MRA are less time-consuming and safer, although the CTA still accompanies with radiation exposure and the MRA is relatively time-consuming and limited in critically ill patients.

The management of the patient combines medical treatment including antiplatelet agents such as aspirin with vasodilatating agent such as calcic inhibitor and surgical or endovascular treatment.

The surgical revascularization to prevent ischemic stroke is an effective treatment for patients with MMD with an ischemic presentation [6]. Although still controversial, revascularization surgery to prevent further hemorrhage has also been performed by many neurosurgeons recently; an endovascular treatment has also been introduced through embolization of a ruptured aneurysm of the collateral vessels and angioplasty of a narrowed segment with or without stenting

SARS-CoV-2 infection associated with hemodynamic stress and emotional disturbances as well as the cytokine storm could act as triggers of Moyamoya angiopathy, the evolution of which may be sometimes Devastating. Hence the importance of adequate and early management for those patients.

©2021 Charra B. This is an open-access article distributed under the terms of the Creative Commons Attribution License, which permits unrestricted use, distribution, and reproduction in any medium, provided the original author and source are credited.

Figure 1.MRI Showing Multiples Hyperintense areas in Diffusion Weighted Sequence (A) and Flair (B) which is related to watersheds infarcts

Figure 2.  Angio MR sequence showing a slender aspect of the polygon of Willis