Right Hemi-Diaphragmatic Twitching: A Case of Atrial Lead Displacement into the Superior Vena Cava and Review of Literature

Right hemi-diaphragmatic twitching is a rare complication of dual chamber pacemaker [1]. It may require fluoroscopy, Chest-X-ray and interrogation for confirmation [2]. It may indicate indirect stimulation of the diaphragm (right-sided) through the right phrenic nerve. Apart from perforation, displacement of the atrial or ventricular lead could stimulate the phrenic nerve to cause diaphragmatic stimulation [1].  In the upper chest, the right phrenic nerve lies lateral to the right brachiocephalic vein and the superior vena cava (SVC) [3].

Depending on the lead which is responsible, the approach may include chest-X-ray or fluoroscopy, change of pacing mode and repositioning of displaced lead. Here we report a patient with diaphragmatic stimulation due to atrial lead displacement to the SVC who underwent re-operation and lead repositioning.

A 55 years old male non-diabetic and non-hypertensive with a 2 weeks history of dizziness and pre-syncopal attack. No history of palpitation, no chest pain and no syncopal attack. At presentation, he was not in obvious distress, afebrile, anicteric, no leg oedema. Pulse was 28bpm, blood pressure was 120/70mmHg, and heart sounds were S1 and S2 only. The electrocardiogram showed complete heart block (shown in Figure 1).

His Na+=142mmol/l, K+=3.8mmol/l, urea=4.3mmo/l and creatinine=76µmmol/l. Informed consent was taken for dual chamber pacemaker implantation. This procedure was done on the 3rd of August, 2019. The pulse generator (Ensura DR MRI EN1DR01, Medtronic) was implanted in the left pectoral region with the right ventricular (RV) lead positioned in the right ventricle and the right atrial (RA) lead positioned in the right atrium close to the right atrial appendage (shown in Figure 2). Procedure was uneventful and patient was discharged home on the 6th of August, 2019. 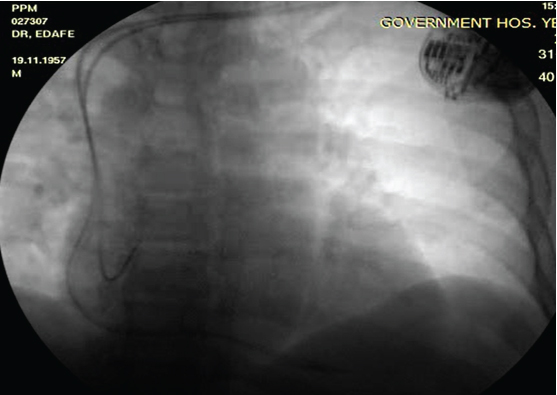 Figure 2. Final Fluoroscopy Image of the Implanted Dual Chamber Pacemaker on The 3rd Of August, 2019

Five weeks after the procedure, he developed sudden onset of hiccup and rhythmic contraction of the abdominal muscles. This continued for 12 hours without abating before he contacted the cardiovascular centre. He was asked to report to the hospital immediately. At presentation, he was hemodynamically stable and pulsations over the right upper abdominal area were visible. These contractions were observed while the patient was in standing and supine positions (video 1: showed abdominal contraction for every pacemaker beat).

Interrogation of the device showed it was pacing both the right atrium and right ventricle; however, high atrial pacing thresholds were recorded in the pacemaker diagnostics and as a result it paced the right atrium at 5.00V @ 0.4ms. Atrial lead impedance was 342ohms. Also, there was loss of atrial sensing and intermittent loss of atrial capture seen on the continuous ECG of the patient and (ventricular) pulse rate was 60bpm (shown in Figure 3). 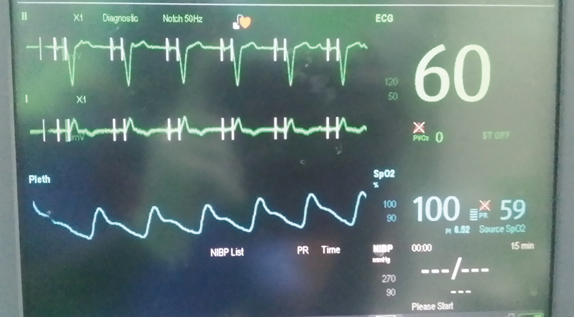 Under fluoroscopy, the atrial lead was found to have dislodged into the superior vena cava (shown in Figure 4). Prior to prepping the patient for atrial lead repositioning, the device was reprogrammed to VVI mode and the rhythmic contractions of the right hemi-diaphragm stopped immediately. 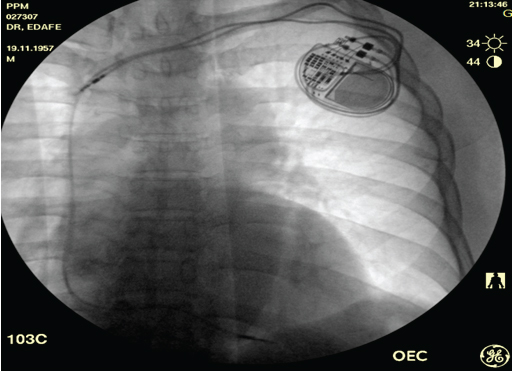 Figure 4. Displaced Right Atrial Lead At The Proximal Segment Of Superior Vena Cava. This Was Taken Before Start of Procedure

Procedure: Informed consent was taken after explaining to the procedure to the patient. Patient was prepped and the dislodged atrial lead was removed and replaced with a new atrial lead (CapSureFix Novus MRI SureScan 5076-52cm, Medtronic) which was positioned in the right atrium (shown in Figure 5 and 6). 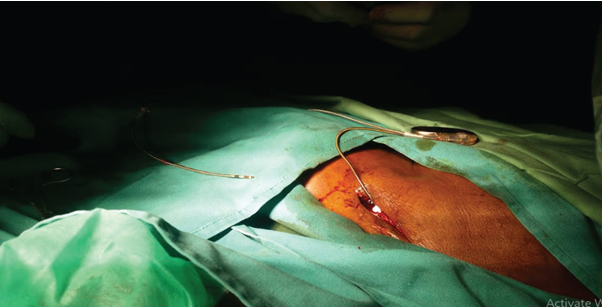 Figure 5. During the Removal and Repositioning of the Atrial Lead 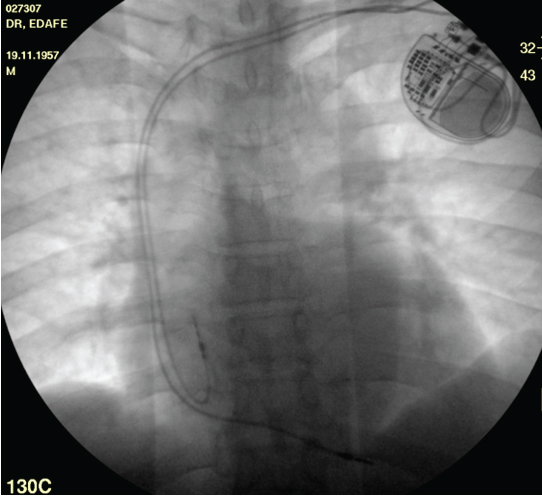 Figure 6. Final Fluoroscopy Image of the Implanted Dual Chamber Pacemaker after the Atrial Lead Was Replaced and Repositioned

Intra-operatively, measured P wave amplitude was 3.7mV at 0.4ms and atrial lead impedance was 380ohms. Diaphragmatic pacing test (10V) was done, and it was negative. The device was afterwards reprogrammed to DDD mode, and atrial output was reduced to 3.50V at 0.4ms (Implant data are shown in table 1 and 2). The patient was discharged two days after atrial lead repositioning.

Table 1 and 2 show the Implant data

Table 1: Final Implant Parameter Values Before the Pocket Was Closed

Pacemaker-induced twitching could also result from spontaneous migration of pacemaker leads or generator, cardiac perforation, inappropriate output and electric current leakage [11-13]. Hence the position, morphology and settings should be checked in a patient with unexpected muscle twitching with an implanted pacemaker [3]. In the present case, atrial, but not ventricular, pacing caused diaphragmatic stimulation by pacing the right phrenic nerve. This was observed on fluoroscopy when the patient presented to the cath lab. The atrial lead had been displaced to the SVC proximal segment. The diaphragmatic stimulation disappeared immediately the DDD mode was switched to VVI mode.

Complications have been reported in up to 9% of atrial lead placements. They are most often related to obtaining venous access (haemorrhage, pneumothorax: 2%) lead dislodgement (4.2%), inadequate pacing and sensing (3.5%) and acute pericarditis (5% in patients receiving active fixation atrial leads) [1].

In the present case, the dislodged atrial lead caused the rhythmic contractions of the right hemi-diaphragm. The pacemaker was pacing the right atrium at 5.00V @ 0.4ms due to high atrial pacing threshold, atrial lead impedance was 342ohms, pulse rate was 60bpm and there was loss of atrial sensing and intermittent loss of atrial capture seen on the patient's continuous ECG (Figure 3). This indicated atrial lead dislodgement. This was confirmed under fluoroscopy which showed that the atrial lead tip has dislodged into the superior vena cava (just below the union of the right and left brachiocephalic veins to form the SVC).  As reported by Khan et al. [9] because the immediate medical relations of the right phrenic nerve in the chest are the right brachiocephalic vein, the superior vena cava, the right atrium, and the inferior vena cava; stimulation of the right phrenic nerve would have been the cause of diaphragmatic twitching. Stimulation of the right phrenic nerve by an atrial pacing electrode displaced into the SVC in a pacemaker Twiddler has been recognized [9]. Reprogramming the device mode to VVI immediately stopped the diaphragmatic twitching. The dislodged atrial lead was removed and replaced with a new atrial lead. Testing of diaphragmatic pacing at 10V was done and no rhythmic contractions of the diaphragm were observed. The device mode was afterward reprogrammed to DDD.

We describe a patient with a permanent pacemaker implanted for complete heart block who presented with sudden onset of right diaphragmatic contraction. Atrial lead was displaced to the superior vena cava where it was pacing the right phrenic nerve. The device was programmed to VVI mode to abolish the hiccup. A new atrial lead was repositioned and the device mode was changed to DDD afterwards.

We deeply appreciate the assistance of Bayelsa Specialist Hospital management

The authors will fund this article from their personal fund. We have no support from any one in funding the article.

The authors certify that they have obtained all appropriate patient consent forms. In the form the patient(s) has/have given his/her/their consent for his/her/their images and other clinical information to be reported in the journal. The patients understand that their names and initials will not be published and due efforts will be made to conceal their identity, but anonymity cannot be guaranteed.

©2020 Edafe easing. This is an open-access article distributed under the terms of the Creative Commons Attribution License, which permits unrestricted use, distribution, and reproduction in any medium, provided the original author and source are credited.

Figure 2. Final Fluoroscopy Image of the Implanted Dual Chamber Pacemaker on The 3rd Of August, 2019

Figure 4. Displaced Right Atrial Lead At The Proximal Segment Of Superior Vena Cava. This Was Taken Before Start of Procedure

Figure 5. During the Removal and Repositioning of the Atrial Lead

Figure 6. Final Fluoroscopy Image of the Implanted Dual Chamber Pacemaker after the Atrial Lead Was Replaced and Repositioned

Table 1: Final Implant Parameter Values Before the Pocket Was Closed