If one asks the UK National Physical Laboratory how they define a metre, they will either explain how they actually measure distance by counting laser light wave lengths of known frequency or perhaps they would actually explain that a metre is known to be 3.335 640 952 nanoseconds of light flight time in vacuum and that the laser method is the best way to measure such an absurdly short time interval to the nearest 5-atto-seconds.

They have my sympathy. I used to work for my own company as my own electronics design engineer and I once measured the length of a coaxial cable using my own very posh dual beam oscilloscope. I could only get my measurement right to the nearest 5 picoseconds. That would be about one million times too crude for any serious NPL work.

My point is that where we want to be very precise about measuring spatial displacement, we are measuring the reality of the displacement, which is the light time of flight. This understanding goes back to 1915 and Albert Einstein’s General Theory of Relativity. The NPL could be working in low Earth orbit, on the Moon or in a submarine at the bottom of the Marianas trench and they would still get exactly the right answer because they are using a rather abstract-sounding transform of the spatial displacement that is gravitational-field-strength relativistically-invariant.

The Space-less Lorentz Transform (no such stuff as space, it is all time) (Figure 1) 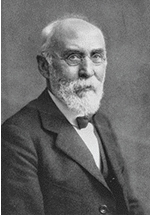 One hundred and twenty years ago a rather interesting chap by the name of Hendrik Antoon Lorentz developed the Lorentz-transform which involves creating space-time transformations that are, or might be, relativistically invariant. Albert Einstein will no doubt have found the work of Lorentz useful in eventually putting up his Special Theory of Relativity in 1905. Ten years later, Einstein went on to uncover his General Theory and everybody breathed a sigh of relief and applauded and lauded the great Einstein. That was all a very big mistake; we should rather have given Einstein a decent stipend and a nice wooden chalet in the Swiss mountains and told him not to come back down again until he could make complete sense.

You see, Albert Einstein had unwittingly uncovered the very space-less (no such stuff as space, it is all time) Lorentz transform that the UK NPL use to define spatial displacement today.

If one did not know that star formation mechanics are all a complete and utter mystery, then one needs to check that one out for oneself. In 2013, I worked upon my own project to explain simple generic star formation mechanics and dark-matter. I came up with a wonderful working model of star formation and dark matter. My model was telling me “this is what dark-matter is and it must be right because this is how stars actually form”. However, my model was effectively telling me that our orthodox cosmology was all complete nonsense. My model required about 10^80 years to play itself out smoothly. How could that be so? What if Einstein’s relativity equations are completely fooling us? That simply had to be the right answer; I mean, the Universe is nearly all dark-matter, stars really do form, end of story.

Anyway, that is how it came to be that a former electronics design engineer ended up in the relativity explanations business. All I was doing was completing the work that Albert Einstein was either too lazy or too confused to perform for himself in 1925. So, although it was not really any of my business, I decided to do what Einstein should have done in the 1920s. That is recognise my own space-less Lorentz transform for what it was, and then go back to my own special theory of relativity and make better sense out of it using my new space-less (it is all just time) Lorentz transform.

I started out wishing to complete Einstein’s work and perhaps destroy all of orthodox cosmology in the process. What actually happened is that I ended up explaining exactly why light slows in glass, or why the NPL can only measure distance accurately in high vacuum. Once one has achieved that, cosmology does not seem so important any more. The deep space red-shifting is caused by a standing Universal exponential relative scale inflation, the cosmological model is indeed all complete nonsense, but who cares about that anymore? Well, not myself, in any case.

About 12% of what I have worked upon in the last 14-years is what I now name as quantum-relativity. If you are interested in the subject of relativity at all, then all of my vast progress with quantum-relativity is published at https://www.quantum-time.org/  Here is just very brief taster of my work upon this interesting subject

needs to be adjusted for our new definition of spatial separation that we call quantum-time, in this system we find that by employing the space-less Lorentz transform that I call the quantum-time coordinate-space transform, c becomes +1i, and so:

Where mE just means the energy tied down in the matter by the nuclear forces.

The nuclear forces are clearly both gravitational. Of course, this incipient theory of everything or Grand Unified Theory (GUT), presents us with a bit of a snag because we know that kinetic energy is positive, but now we find that mass is made up of many gravitational energy holes. In order to understand this we need the special quantum theory. Although SRq is much easier to understand than GRq, it is a very hard sell on its own because Einstein's classical version of SR seems to work out just fine as it stands. It is only once we have the GRq that we are forced to think again.

Maybe you really do need the GRq before you tackle the mind-blowing SRq? https://www.quantum-time.org/newpage#dm

In simple Newtonian reckoning, all energy within any gravitational system is negative with respect to free-space. Newton turns out to have been correct at a much deeper level than has ever been understood before quantum-relativity came onto the scene

The Special Quantum Theory of Relativity or SRq explains to us that what occurs when relative kinetic energy is turned into heat by collision is the collapse of a relative scale illusion. All of those SR equations that Einstein came up with relate to the special relativity illusion. If you recall, orthodox SR explains the clock and scale dilation in the case of relative motion. Those scale dilations are an illusion. There is no real difference in the scale of two objects in relative motion, there just seems to be.

So, let us now refigure Einstein's SR equation for kinetic energy on a special relativity diagram drawn in the first time-derivative of inverted quantum-time coordinate space. Or to put that into more sensible engineering language; a relative clock rates diagram.(Figure 2) 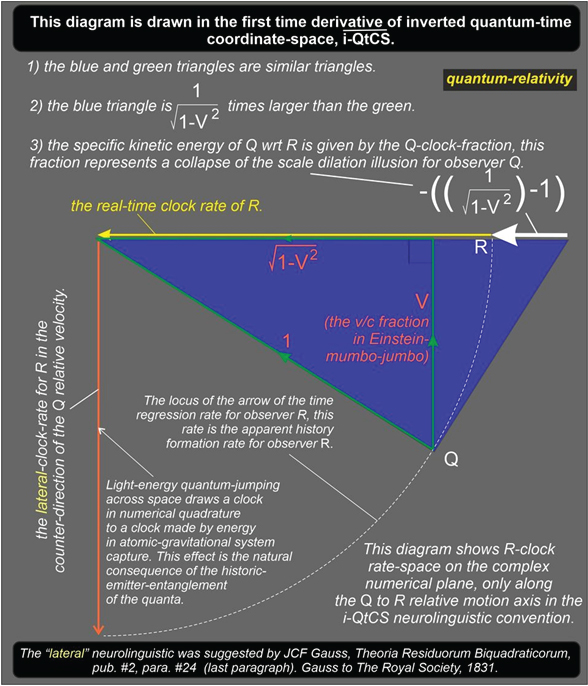 The above diagram shows R-clock rate-space on the complex numerical plane, only in the R to Q relative motion axis using the iQtCS neurolinguistical convention. If that axis does not involve the Q-R-collision, then the relative scale illusion collapse calculation shown is meaningless. In other words, the very concept of relative kinetic energy has no real meaning unless there is a collision. In general physics and engineering work, the car's tires or the aircraft's wings for instance, are in constant collisions, so in general physics work, relative kinetic energy tends to be meaningful all of the time. Without wishing to sound too pedantic, I am merely reminding us that there is no such article as absolute kinetic energy.

Because the collapse in the scale dilation illusion is negative and mass consists of negative energy with respect to free space, we get the wonderful Polish double negative (quite literally meaning a positive). Kinetic energy is of course positive, but this is much harder to explain than it seems to be with Newtonian classical mechanics. Einstein gave me a sort of half-way house, good, but no cigar.

Footnotes to The Special Quantum Theory of Relativity

1) The inversion referred to in the diagram above is caused by our habit, acquired from classical mechanics only, not from natural thought, of regarding history as existing in an entirely artificial Newtonian construct that we call real time. In the non-inverted (or classical) form of quantum-time coordinate-space, we refer to history as imaginary times past and refer to spatial displacement as true time displacement, rather than the lateral-time displacement inferred within the nuerolinguistically inverted diagram.

This distinction is very important if one wants to solve for the mystery of time. If one wishes to retain the mystery of time, then one must use the inverted notational form. In reality, history no longer exists and the passage of time is merely a mirage created by inertia and clock motion upon the event-horizon of time-now. These clocks measure something, but it not positive time progression because that does not actually happen. The clocks actually just measure the depth of their history, and that did actually happen. Look at anything in nature, for instance Galactic self-orbit, an atomic charge shell or a rabbit running in a line and tell me in what way that it is not a clock?

2) Three weeks ago, I added a formal proof in quantum-physics that my quantum-relativity based world is real and that the world that Einstein’s adoring fans drew you into when you were much younger than you are now, was nothing but a load of unrealistic and unhelpful “Einstein-mumbo-jumbo”.  Here is a direct link to my proof.

©2020 Biezanek BC. This is an open-access article distributed under the terms of the Creative Commons Attribution License, which permits unrestricted use, distribution, and reproduction in any medium, provided the original author and source are credited.