The structure of Atomic Nuclei

It is known that the number of nucleons in a nuclei is multiple four plays a large role at determination of properties of nucleus Foremost at the nuclei of containing an even number protons and neutrons spin of nucleus equal to the zero. To this group of elements belong helium 4He,carbon 12C,oxygen 16O.Beecause the nucleus of helium 4 He is the simples ,then it serves as basis for the construction of all anther nuclei. . 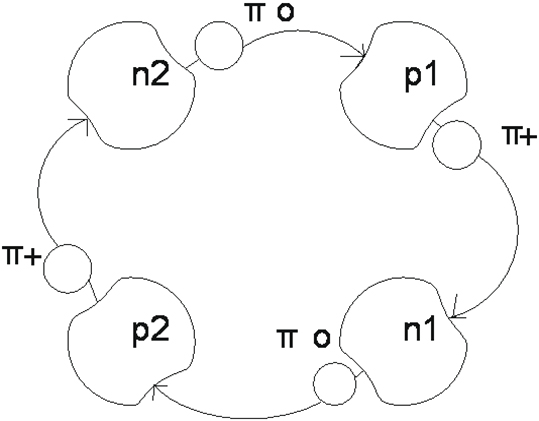 How do nucleus cooperate in a nucleus? They are constrained and cooperate all together. Protons and neutrons are difficult systems consisting of central part and cloud of the continuously emitted and taken in mesons. The proton P1 emits a π+meson and he is taken in by the neutron n1.The proton p2 emits the same π+meson, that is taken in by the neutron n2. And at same time neutrons emit π-0 mesons. That is taken in by protons .After an exchange of the mesons proton and neutron change by rotes.  A proton becomes a neutron and former neutron by a proton. This cooperation recurs in the next loop. A current flows in the ring of helium, because the charge of 1e moves, that creates the magnetic field. This magnetic field helps the orientation of nucleus of helium in relation to other nuclei.

The nuclei of elements consist of chain of nuclei of helium that is bound by inter se binding energy of equal energy of separation of nucleus of helium. This connection come a true by a transmission between nuclei of part of energy. This cooperation connection ends with in nuclei. Why does this chain coagulate in a ball? Maybe she aims to occupy a minimum volume in space.

Next, we will study the 52Fe core .To analyze the 52Fe core we will use the same principle as for the helium core. Although this method is applicable with restrictions for the 52Fe the following factors are not taken into sccount: 1) the shape of the nucleus 2) the influence of a positive charge. Divide the 52FE core into two equal parts.

Again, a value comparable to the fission of the helium nucleus was obtained. In this case we have a division into two  parts 22Na and  30P.One fission point is located to the  left  of the center of the  nucleus  and the second to the  right of the center Thus , we already have three parts of the 52Fe nucleus consisting of  helium nuclei..  (Figure 3)

Now already have five parts of  the 52Fe nucleus.

4). Let us do four more calculations similar to those done above. 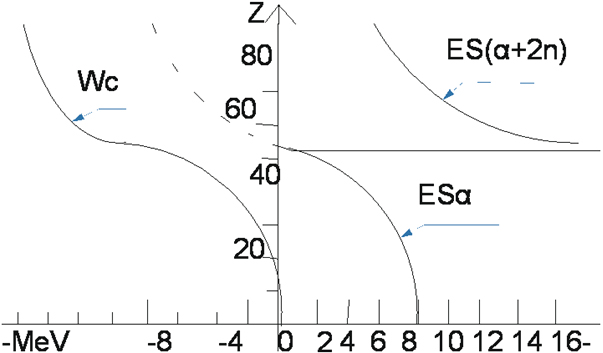 At the A136 A140 transition the binding energy  between helium nuclei becomes 1.629MeV and at theA140,A144 transition the binding energy  becomes negative ES(a)=-1.012MeV. This is the transition which is a weak point and causes the division of the 235U isotopes. The formation of 238U isotope proceeds along the path A131,A137,A142,A147 A152,A157,A162,A167 and  further along the right branch to A238. There are no net places in this branch.The second variant of the formation of these isotopes in Tabl.3.Prior to A137 the formation 0f 235U and 238U isotopes proceeds along the same branch. Beginning with A137 the isotope paths diverge. The 238U isotope follows the same path and the 235U isotope follows the A137 A141 A146 A151, A156 path and further along the previous branch to the end. There is a weak point in the transition between A137 and A141. The binding energy between  the helium nuclei here is   0.144MeV .The second  variant of the  formation of the 235U nucleus is more likely. This is the place where the chain can be broken into two parts by a thermal nutron.

Dividing of uranium by two parts making 2/3 basic nucleus takes place the break of successive chain of nucleus where a value ES (a) approaches a zero.

©2020 Buchakchiiskiy FF. This is an open-access article distributed under the terms of the Creative Commons Attribution License, which permits unrestricted use, distribution, and reproduction in any medium, provided the original author and source are credited.