In this paper, the author describes his hypothesis on the probable partial regeneration for some insulin production capability of the pancreatic beta cells on a type 2 diabetes (T2D) patient via his collected finger-piercing postprandial plasma glucose (PPG) data from 6/1/2015 to 4/27/2020.

The author has had T2D for 25 years and took various diabetes medications to control his elevated glucose levels since 1998.  For the last 20 years, he has suffered many T2D complications, except a stroke. Starting from 2013, he reduced the dosages of his three prescribed diabetes medications.  On 12/8/2015, he discontinued his last medication, metformin HCL.  Since then, he has completely relied on a stringent lifestyle management program to control his diabetes conditions.  As a result, his HbA1C has been reduced from 10% in 2010, while taking many diabetes medications, to an average of 6.63% during 2016-2019 without any medication or use of insulin injection.

He has kept approximately 2 million data of his own medical conditions and lifestyle management details.  He also developed sophisticated computer software by using big data analytics and artificial intelligence to analyze, process, and manage his stored massive biomedical data.

Due to the author’s academic background in disciplines of mathematics, physics, engineering, and computer science, his research methodology is a “math-physical medicine” approach, rather than a “biochemical medicine” approach as used in most of other research articles.  He views these biomedical data as a collection of nonlinear composite signal waves. He applied optical physics to establish the linkage between the nutrition ingredients in food (especially carbs/sugar), duration and amount of exercise, and predicted glucose value.  He applied the signal processing technique of wave theory to decompose his measured PPG time-series signal wave into multiple (~19 influential factors), single-sourced (i.e. uncoupled) waveforms. Next, he examined each signal wave carefully, and finally recombined them into a predicted PPG composite wave.  He compared this predicted glucose signal against the measured glucose signal to calculate its linear accuracy rate and statistical correlation coefficient. He further improved his prediction model via a trial-and-error “curve-fitting” method which he learned from his 30-years engineering career.

During the period of approximately 5 years or 1,791 days from 6/1/2015 to 4/27/2020, he had a total of 5,373 meals.  He usually gathered at least three primary data per meal: carbs/sugar amount, post-meal walking steps, and measured PPG.  He then calculated one predicted PPG per meal.  Therefore, he has collected, accumulated, and utilized a total of 21,492 data for this particular analysis.

In his earlier research papers, he has demonstrated that diet contributed ~39% and exercise contributed ~41% to the PPG value formation.  The impacts on PPG due to these two important factors of food and exercise almost cancelled each other out. The intake of 5 to 8 grams of carbs/sugar each meal would generate around 10 to 15 mg/dL of PPG and walking ~4,000 steps after each meal would reduce about 10 to 15 mg/dL of PPG.  The remaining 20% of PPG influenced by the other 17 factors was identified using signal processing technique of wave theory.  However, it cannot be denied that, for diabetes patients, the so-called “survival or left-behind” capacity of insulin production by the pancreatic beta cells is still the most prominent contributing factor.  The unknown facts of the beta cells survival percentage and the possible “self-repaired” capacity are the aim of this particular research.

Figure 1 shows both of his predicted and measured curves of PPG baseline in mg/dL from 6/1/2015 through 4/27/2020.  Nevertheless, the focus is to study the PPG baseline value change’s trend and moving pattern. 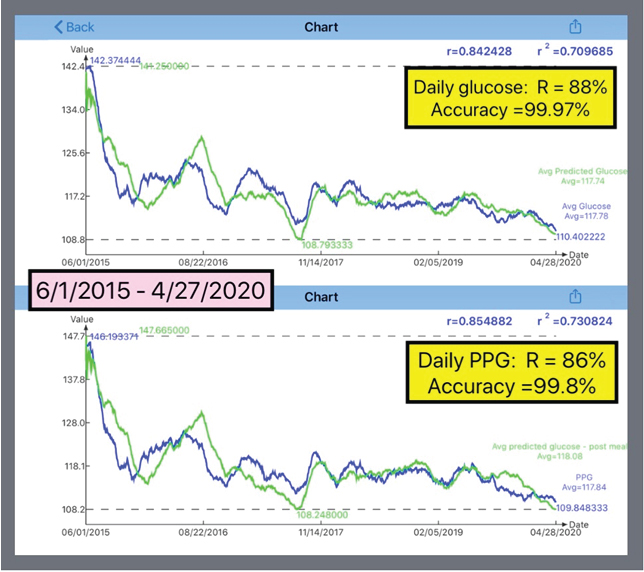 In Figure 2, he tried to calculate the declination rate of the PPG Baseline in a quantitative manner by connecting those critical dates and their associated PPG values.  The most important observation is that the measured PPG baseline curve is decreasing year after year since 6/1/2015. 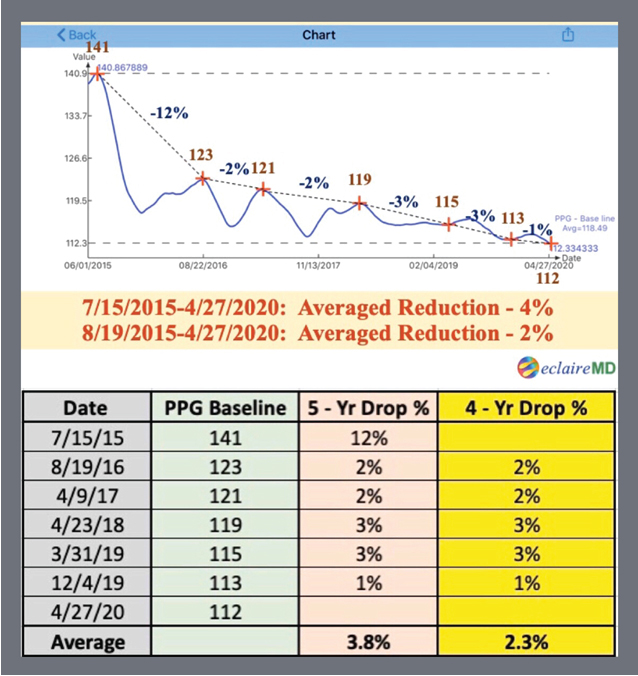 The author observed a vast improvement in his diabetes conditions after following a stringent lifestyle management since 2014, the year he developed his mathematical model of metabolism index (MI). From examining his own PPG data including the existing vulnerable conditions of his long-term “damaged” pancreatic beta cells, he hypothesized that beta cells are still capable of “self-repair” to a certain degree (about 2% per year).

The author decided to write a few articles from his in-depth research to encourage other medical scientists to conduct similar work, even though they may use different research methods, to further explore this subject of “probable pancreatic beta cells’ regeneration”.