The cosmic microwave background (CMB) is believed to be the residual effect of an alleged primordial explosion and as such is the only evidence supporting the big bang hypothesis.  However, precise measurements by the Cosmic Background Explorer satellite (COBE) indicate that the CMB is blackbody radiation most probably caused by interstellar dust.  The CMB is smooth and looks the same in all directions for the same reason that a fog looks smooth and uniform in all directions.  The CMB appears as an electromagnetic fog on optical telescopes and as a static hum on radio telescopes.

In 1964, cosmic microwave background radiation (CMB) was discovered by radio astronomers Robert Wilson and Arno Penzias [1]. They heard the CMB as a static buzzing sound coming from every part of the sky.  Big bang proponents had been searching for confirming evidence for their singularity theory, and they hoped this would be it.

CMB radiation can be detected by telescope in every direction as a patchy background, about 13.4 billion light-years away [2]. This observation is mistakenly believed to be thermal radiation left over from recombination, the epoch during which charged electrons and protons supposedly first became bound to form electrically neutral hydrogen atoms, shortly after the alleged big bang.  The assumption is that hydrogen, the lightest element, was made exclusively during the big bang and in the general area of its supposed origin.   However, ionized hydrogen gas permeates the entire universe.

From 1989 until 1993, COBE satellite Explorer 66 investigated the cosmic microwave background [3]. Astrophysicists expected to see evidence of directional dependency (anisotropy) that could be traced back to the site of the alleged big bang.  That was not what they saw, however.  Instead, Explorer 66 measured an isotropic blackbody spectrum with little variation across the sky. 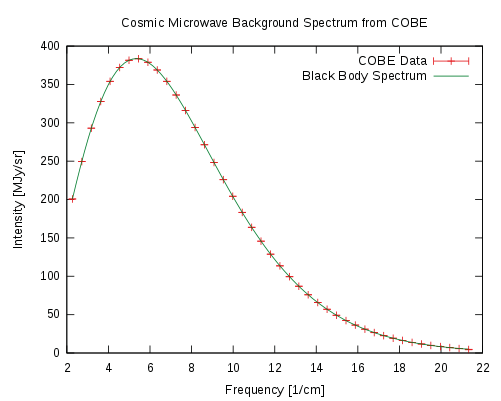 The above graph represents the cosmic microwave background spectrum as measured by the FIRAS instrument on the COBE.  This is the most precisely measured blackbody spectrum in nature. The error bars are too small to be seen even in an enlarged image, and it is impossible to distinguish the observed data from the theoretical curve [4].

NASA thus confirms that the CMB follows the precise curve for blackbody radiation.  A blackbody is an opaque object in space that absorbs radiation of all wavelengths that falls on it.  Then, when the blackbody is very hot and at a uniform temperature, it emits its own radiation that is outside the visible spectrum of light.  NASA’s measurements indicate that this blackbody curve peaks at 0.3 cm wavelength and 100 GHz frequency, which is at the high end of the microwave spectrum.  The blackbodies in question are most probably interstellar dust.

©2020 Rowland D. This is an open-access article distributed under the terms of the Creative Commons Attribution License, which permits unrestricted use, distribution, and reproduction in any medium, provided the original author and source are credited.