Chronic Relapsing Inflammatory Optic Neuropathy is an inflammatory optic neuropathy which is frequently bilateral, often painful, and characterized by relapses and remissions. Magnetic Resonance Imaging scans of the Brain are normal and those of the optic nerves often, but not always, show high signal abnormalities which enhance. CRION responds well to corticosteroids, but long-term immunosuppression is often necessary [2].   Thus CRION is a distinct entity, which is sero-negative for Anti-Aquaporin-4 auto-antibodies and recognized by and managed through its dependency on immuno-suppression with steroids and immunomodulators [3].

A 49-year-old gentleman first presented to us in January 2015 with a history of sudden painless loss of vision in the left eye since past 2-3 days. On examination, he has a best corrected visual acuity of 20/20, N6 in the right eye and counting fingers close to face in the left eye. He had a relative afferent pupillary defect (RAPD) in the left eye with a fundus examination showing a mild temporal pallor in the right eye and a mild to moderate disc hyperemia with odema and rim elevation and blurring of disc margins, nerve fiber layer odema and a mild venular tortuosity in the left eye suggesting a left optic neuritis. Figure 1 and Figure 2. 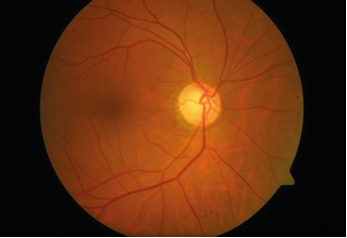 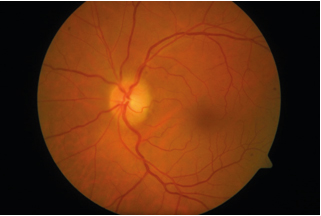 He was investigated thoroughly from point of view of Optic Neuritis and all investigations including his Neuro-imaging and Cerebro-spinal Fluid assessment were inconclusive towards a definite etiology for his optic Neuritis. Especially done were his Anti-nuclear antibodies, Serum Anti-Aquaporin-4 auto-antibodies which were negative and Serum Angiotensin Converting Enzyme levels which were within normal limits. He received 5 doses of pulsed Intravenous Methylprednisolone followed by an oral steroid taper and achieved in 2 months by March 2015; a best corrected visual acuity of 20/25 with a normal colour vision in the left eye.

He had his first relapse in April 2015; with the right eye being affected with a drop of best corrected visual acuity to Finger counting at 1 meter with ocular findings suggestive of Optic Neuritis in the right eye. A Visual Evoked Potential was done which showed a prolonged latency in both eyes (left more than right). His blood C-Reactive Protein levels were positive and hence an immunomodulator in the form of 1000 mg of Mycophenolate Mofetil was introduced into his treatment regimen to achieve an improvement of vision in both eyes to 20/20, N6 with normal colour vision by May 2015.

He was regularly followed up and was in remission on treatment for one year till May 2016 after which the dose of Mycophenolate was reduced to 500 mg/day. Within 5 months of this dose reduction; in October 2016, he had a second relapse; this time in the left eye with a drop-in vision to 20/60, N8, although with normal colour vision. Optic Nerves showed a temporal optic nerve pallor in both eyes Figure 3 and Figure 4.  with no nerve fiber layer odema but a central scotoma in the left eye suggestive of a left Retrobulbar Neuritis. 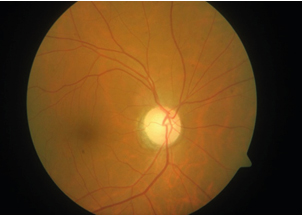 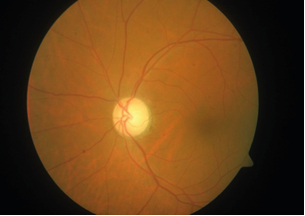 He received pulsed Intravenous Methylprednisolone followed by an oral steroid taper and re-adjustment of the dose of Mycophenolate to 1000 mg/day. By December 2016, he had achieved a best corrected visual acuity of 20/20, N6 in both eyes with a normal colour vision in both eyes. At this visit, he was tested and found to be positive for Anti-Myelin Oligodendrocyte Glycoprotein Antibody (MOG-Ab). His vision is since then stable on a maintenance dose of 750 mg / day of Mycophenolate Mofetil orally.

The Retinal Nerve Fiber Layer of patients with Neuromyelitis Optica (NMO) and Chronic Relapsing Optic Neuritis (CRION) is more severely damaged than patients with multiple sclerosis. 4 CRION requires to be differentiated from demyelinating optic neuritis and ischemic optic neuropathy because the treatment is different and the outcome without treatment is poor [5]. Myelin Oligodendrocyte glycoprotein (MOG-Ab) has been proposed as a new marker of inflammatory demyelinating diseases of the central nervous system [6, 7]. Characteristics of MOG-IgG-associated diseases include optic neuritis with a good response to steroid, absence of serum Anti-Aquaporin-4 auto-antibodies, and steroid-dependent relapse or disease exacerbation [7, 8]. MOG-Ab seropositive patients relapse but respond to treatment better than AQP4-Ab seropositive optic neuritis [9]. The most commonly used medications for long-term immunosuppression are Mycophenolate, Azathioprine and Rituximab [10].

This anecdotal case presentation and its management with a good outcome bring out the need to keep in mind the diagnosis of CRION while dealing with Optic Neuritis or Optic Neuropathy. The case teaches us the all important take home message to test for appropriate antibodies especially in a case of Relapsing Optic Neuritis because correct and timely treatment with immunomodulation has a good visual outcome which would otherwise not be possible. Finally, testing for MOG IgG antibodies in suitable patients would lay the framework for describing the spectrum and outcome of Optic Neuritis or Optic Neuropathy in MOG IgG Antibody Positive vs Antibody Negative patients in our population.

Thus, early recognition of patients suffering from Chronic Relapsing Inflammatory Optic Neuropathy (CRION) is relevant because of the associated risk for blindness if treated inappropriately and the favorable long term outcome of appropriate immunomodulation.

©2020 Surya N. This is an open-access article distributed under the terms of the Creative Commons Attribution License, which permits unrestricted use, distribution, and reproduction in any medium, provided the original author and source are credited.