Spontaneous hemomediastinum may occur due to multiple and contributory causes such as: secondary to hemorrhagic disorders, mediastinal tumors or after sudden increase in intrathoracic pressure, (e.g. during coughing, sneezing or vomiting, or sudden sustained hypertension) [1, 2].

In this case report, a 76-year-old male is presented with of thyroid artery aneurysm resulting in hemomediastinum causing thoracic pain.

Spontaneous hemomediastinum is rarely observed in clinical practice and is a potentially life-threatening condition. Underlying causes have been categorized into three groups. First, spontaneous hemomediastinum may occur secondary to bleeding disorders such as hemophilia, or secondary to anticoagulant treatment. Secondly, mediastinal tumors (e.g. thymomas, teratomas), organs or blood vessels may be involved.

In this case report, a 65- year-old male treated for diabetes mellitus type II, for a long time, and used irregular medications presented in the emergency room with a suddenly syncopal condition, dyspnea, and edema of the cervical region, severe thoracic pain. He also mentioned complaints of heart burn and dysphagia, while he was working.

In the inspection of the patient, huge ecchymosis and hematomas of the antero-lateral chest wall were presented. (Figure 1).

After multidisciplinary team, the patient was sent to the intensive care unit, under mechanic ventilation. 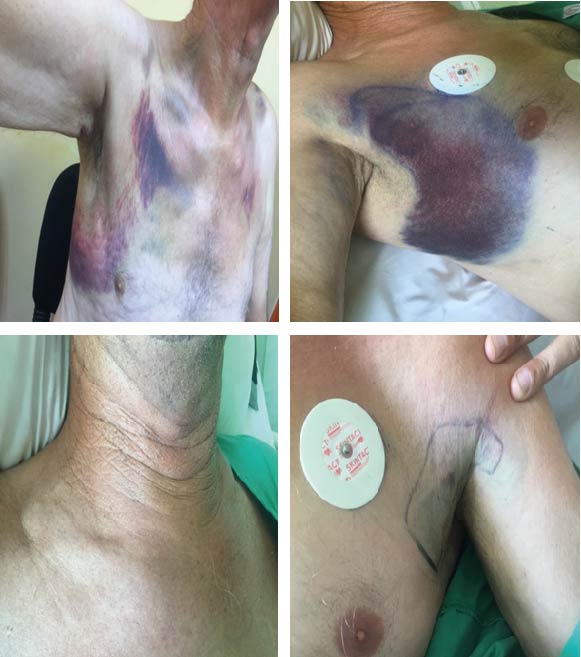 Figure 1. Edema and Gauge Hematoma of the Patient at the Emergency Room 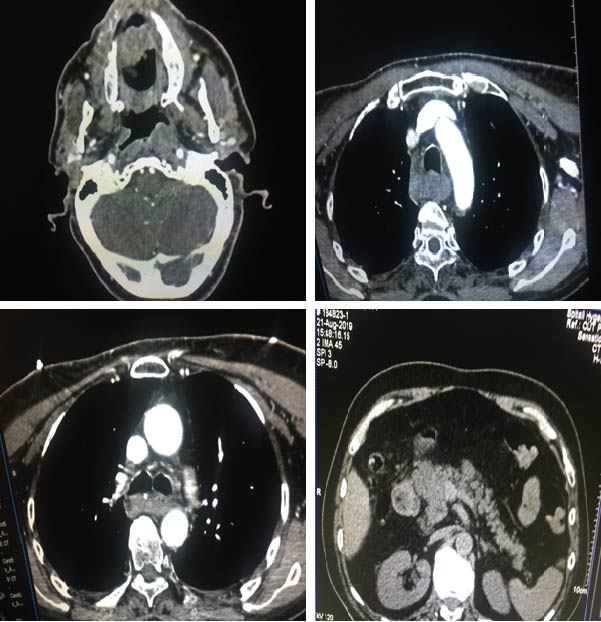 A contrast-enhanced chest CT was performed, which ruled out a pulmonary embolism, but did reveal a huge mass hemorrhagic mass in the mediastinum.

Due to respiratory distress because of upper airway compression, an endotracheal intubation was lifesaving and avoided tracheotomy in the unit of intensive care.

The patient recovered quickly and was discharged ten days after the procedure. Six weeks later, upon evaluation at the outpatient clinic, he was free of complaints and chest CT showed that the mediastinal hematoma had completely resolved.

An aneurysm typically involves all 3 layers of the vessel wall, whereas a pseudoaneurysm

represents a contained rupture in which not all layers of the affected wall are involved. [6].

High success rates have been reported for bronchial artery embolization, but recurrence after

A true aneurysm of the thyroid artery is extremely rare [7]

Surgical ligation and/or excision and endovascular embolization were reported as possible treatments for this rare disease [8].

In order to adequately diagnose a hemomediastinum, performing a chest CT with contrast material application is the designated approach. Consecutive angiography may then be the

A hemomediastinum is a rare pathological event with several possible underlying causes including a ruptured bronchial artery aneurysm.

©2020 Gradica F. This is an open-access article distributed under the terms of the Creative Commons Attribution License, which permits unrestricted use, distribution, and reproduction in any medium, provided the original author and source are credited.

Figure 1. Edema and Gauge Hematoma of the Patient at the Emergency Room