What Einstein did Not Consider about Gravity

General relativity (GR) is the geometric theory of gravity that has become the accepted definition of gravitation in modern physics. GR proposes that gravity is the result of a geometric distortion of four-dimensional spacetime by massive objects. The more mass that produces gravity in a body, the more distortion you get. This distortion supposedly changes the trajectories of objects moving through space and even the paths of light rays as they pass close by massive objects.

Unfortunately, general relativity is a fatally flawed theory that is a diversion from how gravity really works. This study explains in detail the logical errors, false assumptions, and misinterpretation of evidence upon which GR is based. Geometric spacetime does not exist, does not curve, and cannot possibly interact with or be affected by gravity.

In 1916, Albert Einstein published his paper on General Relativity, the geometric theory of gravity [1]. General relativity (GR) states that the force of gravity is associated with the curving/warping of spacetime. GR has become the current description of gravity in modern physics. Unfortunately, GR theory suffers from two fatal flaws: (1) as an abstract (nonphysical) form of mathematics, geometry is incapable of interacting with any physical force (e.g., gravity); and (2) spacetime is a mathematical fiction.

In 1905, the same year he received a PhD from the University of Zurich, Einstein developed his famous equation of mass-energy equivalence (E = mc2), which later became known as the theory of special relativity [2]. The only variables in this equation are energy (E), mass (m), and the speed of light (c). Time is not a factor.

In 1908, attempting to better explain his former student’s theory of special relativity (E=mc2), mathematics professor Hermann Minkowski expressed it in terms of a mathematical model that fused time and the three dimensions of space into a single four-dimensional continuum (later known as Minkowski spacetime). Notice two things about this model: 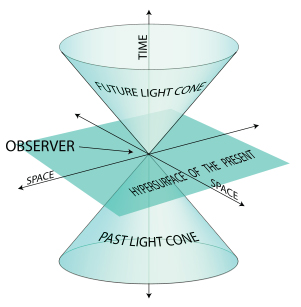 1. It is not possible to assign co-ordinates to the hypothetical time axis; and

2. Because E = mc2 does not include any time variable, there is nowhere said equation fits into this four-dimensional model.

In 1915, Einstein developed his theory of general relativity, the geometric theory of gravitation that is the current description of gravity in modern physics. Einstein proposed that gravity is the result of a geometric distortion of four-dimensional spacetime by massive objects. The more mass that produces gravity in a body, the more distortion you get. This distortion supposedly changes the trajectories of objects moving through space and even the paths of light rays as they pass close by massive objects. Simply stated, massive objects bend the space around them, causing other objects to deviate from the straight lines they otherwise would have followed. Einstein chose the Minkowski spacetime model to depict graphically the gravitational forces supposedly implied in general relativity.

In this model, a massive object (planet or star) appears to be sitting on a fourth-dimensional spacetime fabric, weighing it down, as a heavy ball would do to a rubber membrane in three dimensions. A beam of light passing close by the Sun, for example, would theoretically follow the lip of the curved spacetime fabric, causing it to bend towards the Sun (rather than pass by it in a straight line). General relativity thus depends on the following three unverifiable assumptions: (1) 4-D spacetime is real, (2) spacetime curves, and (3) spacetime interacts with gravitational forces of massive objects.

Spacetime is a mathematical model that fuses the three dimensions of physical space and the abstract (nonphysical) dimension of time into a single four-dimensional physical continuum. This is an interesting graphical excursion that bears no relation to reality.

Suppose a world of two dimensions could exist and you wish to represent it on a three-dimensional graph. How would you know if that circle you see is a sphere, a cone, a cylinder, a dome, or something else? It is not possible to extrapolate meaningful information from two dimensions into three, nor from three into four.

Time measures the changing positions of objects and sequences of events that occur within space. Time is an abstract (nonphysical) measurement within the 3-D. Time cannot be extracted from space and projected onto a fourth supposedly physical axis with its own independent set of reference points. Whatever model you create that includes mathematical measurements of an intangible dimension cannot possibly be real. To believe in spacetime is to believe in at least one direction to which one cannot point.

Spacetime cannot curve because spacetime is not real. It is an illusion. All Einstein accomplished with 4-D modelling was a fanciful graphic diversion that cannot possibly exist. Nothing about it explains how gravity could possibly bend light.

Although general relativity is the accepted definition of gravitation in mainstream physics, this theory is fatally flawed. Spacetime is the geometric illusion that can be expressed algebraically as 3 D + 0 D = 4 D (where D = dimension). Logic tells us that geometric spacetime is not real, does not exist, does not curve, and cannot possibly interact with or be affected by gravity.

Geometry is the mathematics which describes the properties and relations of points, lines, and surfaces – as well as the relative locations of objects. Mathematics is an abstract form of measurement and not a physical thing. As such, geometry can neither cause nor be influenced by anything that exists in physical reality. General relativity fails because it presumes that a physical force (gravity) interacts with an abstraction (geometry) that has no physical existence.

Isaac Newton predicted that beams of light passing close to the Sun would bend very slightly towards the Sun. Einstein’s theory of general relativity predicted a degree of deflection towards the Sun that was approximately twice as much as Newton’s. The solar eclipse of 1919 provided evidence that appeared to confirm Einstein’s prediction of how much gravity would bend light. Einstein won by a small margin, making him an overnight celebrity [6].

On 9 November 1919, page six of the New York Times carried this story: “Eclipse Showed Gravity Variation. Diversion of light ray accepted as affecting Newton’s principle. Hailed as epoch making. British scientist calls the discovery one of the greatest of human achievements.” Three days earlier, Eddington and Dyson had shown off their results at a joint meeting of the Royal Society and the Royal Astronomical Society [6].

Frank Watson Dyson, Astronomer Royal of Britain, conceived the perfect experiment to test Einstein’s theory [4]. A total solar eclipse on 29 May 1919 would occur just as the Sun was crossing the bright Hyades star cluster (about 151 light-years away). Light from these stars would have to pass by the Sun’s gravitational field on its way to Earth and would be visible during the darkness of the eclipse [5].

Deflection of light is measured in arcseconds. An arcsecond is one 3,600th of a degree, or the angle made by the hypotenuse of a right-angled triangle one inch high and 1.9 miles long. This is an incredibly tiny deviation to estimate from the images of stars located 151 light-years away.

No one seems to have taken parallax into consideration. Parallax is a difference or change in the apparent position of a celestial object as seen from different points on the Earth’s surface [8-13]. It is a natural phenomenon caused by viewing stars from different angles at various locations on the globe and can also be affected by atmospheric and seasonal conditions at those locations. Parallax alone could account for discrepancies in readings between Oxford and Principe, between Principe and Sobral, and between Sobral during the eclipse and Sobral two months afterward.

Only two photographic plates taken at Principe were usable, and each contained the same five stars. Five is too small a sample size from which to extrapolate statistically significant data.

Sobral’s larger telescope had lost focus during the eclipse but regained focus during the reference shots two months later. Dyson rejected these readings, which if they had been used would have yielded a deflection of 0.93 arcseconds (consistent with Newton’s prediction). Thus, the two Sobral instruments disagreed with each other.

In his Brief History of Time, Stephen Hawking says of the 1919 deflection results: “Their measurement had been sheer luck, or a case of knowing the result they wanted to get, not an uncommon occurrence in science” [11]. The errors in data were as large as the effect they were trying to prove, thus making the results inconclusive. We have no way of knowing whose prediction may have been the more accurate, Einstein’s or Newton’s.

The photosphere is the visible surface of the Sun, a gaseous layer about 100 km thick. When we look at the limb, or edge, of the solar disk we see light that has taken a slanting path through this layer and we only see through the upper, cooler, and dimmer regions [12].

Isaac Newton’s prediction of light bending as it passed close to the Sun had nothing to do with gravity. Gravity is a force of attraction between two mass bearing objects. Light has zero mass and is thus unaffected by gravity.

Newton was also an expert in optics, having written the original treatise on this subject in 1704.7 He knew that light bends as it passes from air (low density) into water (high density) and described this phenomenon metaphorically as light falling “much the way particles fall under gravity.” Photons, of course, cannot fall.

Newton predicted that photons from distant stars grazing by the Sun would seem to “fall” just a bit towards the Sun as they passed by, resulting in a slightly curved trajectory. This is because the photosphere (luminous envelope) surrounding the Sun is denser than the space through which distant light beams travel.

The Sun is a super massive ball of gas that is believed to have an average density of about 1.4 times that of water. The photosphere, the outer region of the Sun that is transparent to photons, may have a density less than that of water but still enough to refract light that passes through this dense gaseous medium. Gravity cannot bend light.

Unlike an optical lens, a so-called gravitational lens produces a maximum deflection of light that passes closest to its center, and a minimum deflection of light that travels furthest from its center [8]. This is simply because the photosphere of a super massive object decreases in density in proportion to its distance from the surface of said object.

The Gravity of the Situation

With his general relativity theory, Einstein was essentially saying that the gravity of super massive objects warps spacetime, which warpage in turn causes light to fall towards said massive object. This is convoluted logic. If the gravity of a massive object is strong enough to change the shape of hypothetical spacetime, then why is it not presumed to be strong enough to bend light directly?  What practical purpose does the intermediary of mythical spacetime serve in this fanciful hypothesis? Neither light nor hypothetical spacetime contain any matter. Both are unaffected by gravity.

As we have seen from the above analysis, 4-D spacetime is an illusion and gravity cannot bend light. All the phenomena attributed to general relativity are entirely explicable by Newtonian gravity and Newtonian optics.

No theory can be valid if it is based on a false assumption. 4-D spacetime is a false construct that cannot possibly exist. Therefore, general relativity is a failed theory. Newton’s universal law of gravitation explains everything that is real about gravity.

©2020 Rowland D. This is an open-access article distributed under the terms of the Creative Commons Attribution License, which permits unrestricted use, distribution, and reproduction in any medium, provided the original author and source are credited.